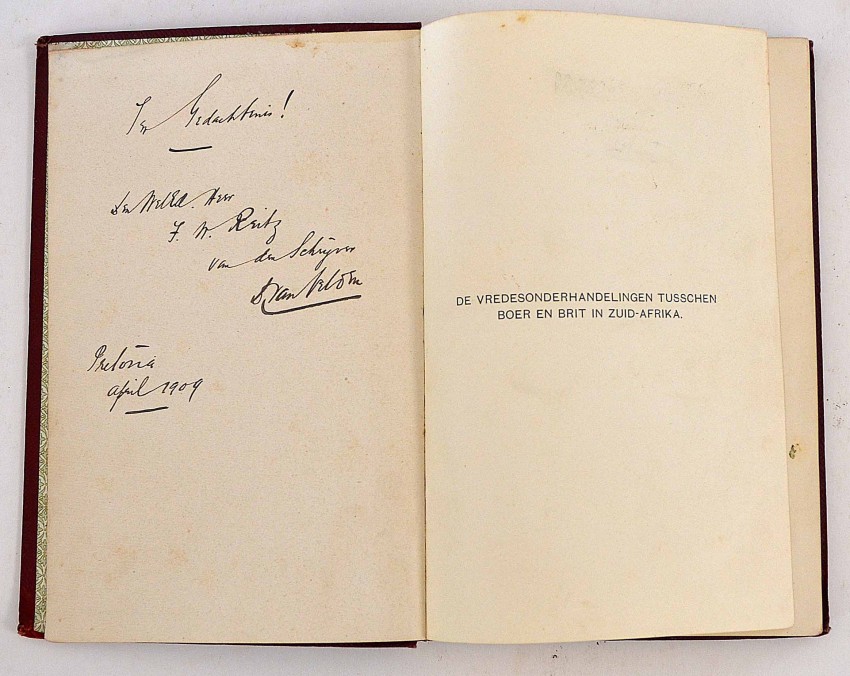 The first edition of this work on the peace negotiations at the end of the Boer War. Written in Dutch, the English edition only following three years later. The book in 8vo. with 215pp. contains several plates with portraits and facsimiles of documents and letters, with the original tissue guards. In the scarce deluxe embossed red leather binding (the regular edition was bound in green cloth). All edges gilt and patterned endpapers.

A nice presentation copy inscribed on the verso of the front free endpaper to ex President on the Orange Free State, F.W. Reitz by one of the authors (Van Velden) "Ter Gedachtenis" and dated Pretoria, April 1909. The book gives a full description of the negotiations between the British and the Boers after the Boer War leading to the Treaty of Vereeniging. Reitz features in these negotiations and was a signatory of the Treaty. Hence a most important association copy.

The leather boards are a little rubbed with a few stains, but still in very good condition. Internally the book is clean and tight and the endpaper hinges are intact. A nice copy.

Francis William Reitz, Jr. (Swellendam, 5 October 1844 - Cape Town, 27 March 1934) was a South African lawyer, politician, statesman, publicist, and poet who was a member of parliament of the Cape Colony, Chief Justice and fifth State President of the Orange Free State, State Secretary of the South African Republic at the time of the Second Boer War, and the first president of the Senate of the Union of South Africa. 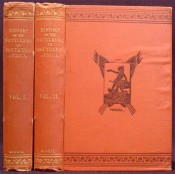 THE HISTORY OF THE BATTLES AND ADVENTURES OF THE BRITISH, THE BOERS, AND THE ZUL

Pamwe Chete - The Legend of the Selous Scouts

The best or the worst of empires, which?