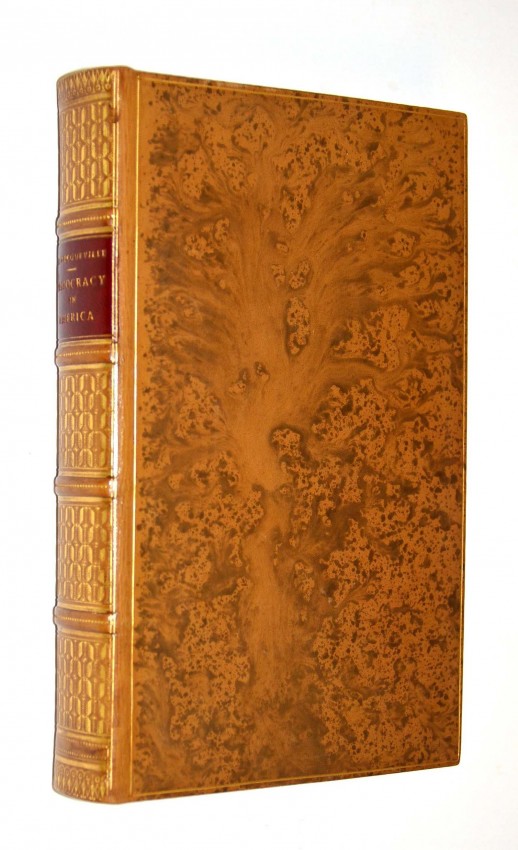 Finely bound in full brown tree calf with red leather gilt titled label on the spine which has four raised bands and intricate gilt decoration. Additionally, all the edges have gilt tooling. Hand sewn headbands and marbled endpapers. All edges gilt. Internally this copy is fine and unmarked other than the inscription above and is totally lacking in foxing. Altogether a superb and most attractive book.

Alexis Charles Henri Clérel, Viscount de Tocqueville (29 July 1805 - 16 April 1859) was a French diplomat, political scientist and historian. He was best known for his works Democracy in America (appearing in two volumes in France in 1835 and 1840) and The Old Regime and the Revolution (1856).

Democracy in America was published in two volumes, the first in 1835 and the other in 1840. It was immediately popular in both Europe and the United States, while also having a profound impact on the French population. By the twentieth century, it had become a classic work of political science, social science, and history. It is a commonly assigned reading for undergraduates of American universities majoring in the political or social sciences, and part of the introductory political theory syllabus at Cambridge. Harvard Professor Harvey C. Mansfield calls it "at once the best book ever written on democracy and the best book ever written on America."

John Canfield Spencer was born on January 8, 1788 in Hudson, New York. He was the oldest child of Ambrose Spencer, Chief Justice of the New York Supreme Court, and his first wife, Laura Canfield. Amongst many other achievements, he was Secretary of War and later Secretary of the Treasury under President John Tyler. who twice nominated him (unsuccessfully) to be an Associate Justice of the Supreme Court.