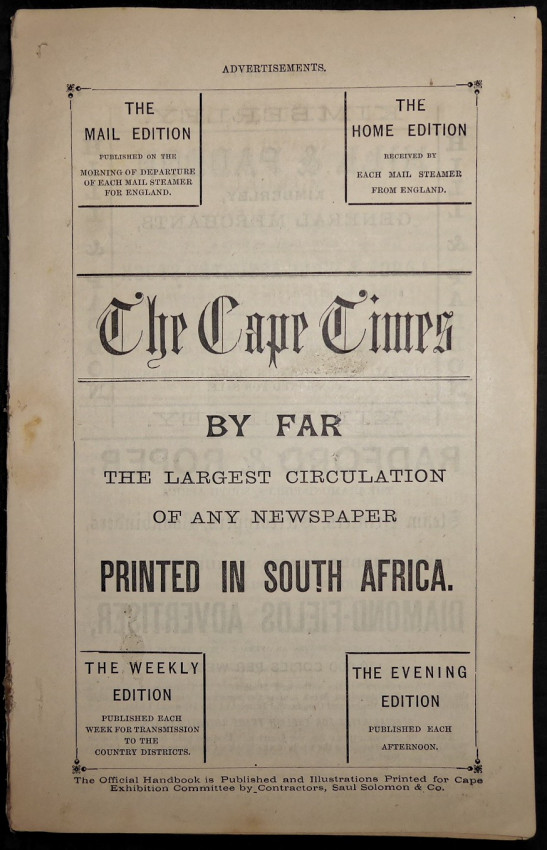 DIAMOND MINING AT THE CAPE

50pp. Saddle-stitched with soft self-cover. Includes two plans of diamond mine workings. Original disbound article by Reunert, extracted from the official handbook of the exhibition committee.

Reunert came to South Africa in 1879 and worked as an engineer at the Orion Diamond Mining Company in Kimberley and later as a consulting engineer in partnership with Edward Jones. About 1884 he established his own firm, "T. Reunert, Engineer and Machinist" (later T. Reunert and Company), which thrived in Kimberley for many decades. He was elected a member of the (British) Institution of Mechanical Engineers in 1883, and a member of the Institution of Civil Engineers in 1889, serving on the South African advisory committees of both bodies. In 1888 he moved to Johannesburg (where gold had been discovered two years earlier) and, in partnership with Otto Lenz, founded the engineering firm Reunert & Lenz in 1889. He remained on the Witwatersrand for the rest of his career. His firm, which was always closely associated with local manufacture, developed into one of the largest of its kind in South Africa. In 1885 he married Catherine E. Green, with whom he had four sons.

Reunert's knowledge of the diamond mines around Kimberley led to several publications. In 1886 he wrote "Diamond mining at the Cape"  It was one of the earliest substantial articles on the mines at Kimberley, Bultfontein and Dutoitspan, and included a description of the geology of the region. An expanded and updated version was published as "The diamond mines" in the Illustrated official handbook of the Cape and South Africa (1893, pp. 323-356). This article, or an extended version of it, was initially written for the South African and International Exhibition held in Kimberley in 1892 and was published as a monograph entitled Reunert's diamond mines of South Africa (London, 1892). It was the first work of note to deal exclusively with the diamond mines around Kimberley and in the Free State. A more comprehensive treatise by him was his book Diamonds and gold in South Africa (Cape Town, 1893, 242 pp).

In the Wet (1953 first edition with near very good dustjacket)