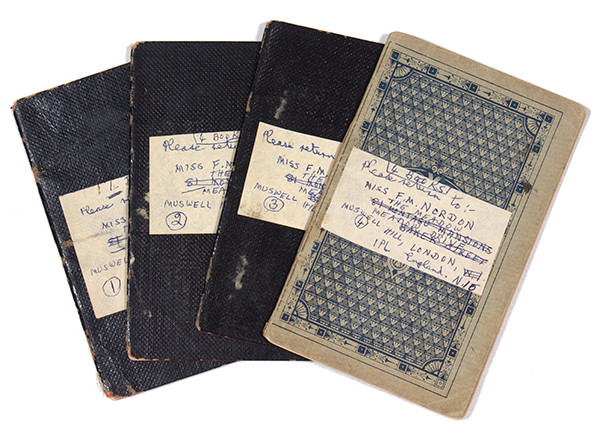 DIARIES OF THE SIEGE OF MAFEKING

Book 1
The first entry described from The Guard Tent Hospital Redoubt Mafeking 24 November We have now been under siege 7 weeks and today November 24th are still holding our own despite terrible odds. I intend to cable you after the line is clear, although you will have probably heard before then whether we have succeeded in holding Mafeking or whether we are taken prisoner to Pretoria. Every 2 nights out of 3 we have to go some 100 yards from our fort and keep sentry duty for 2 hours until our relief man comes out. Guard duty is started at 7 pm and end at 5 am. Colonel Vyvyan, the Town Commandant who is very popular here comes round in the evening and early morning and we are very careful to challenge him.
13 October the Boers have now fired over 800 shells into this little place and yet we live.
1 December for 2 hours under heavy cross gun and rifle fire. We had 6 killed and 5 wounded. Amongst the killed was the Hon Captain Douglas Marsham.
22 December Lady Sarah Wilson, sister of Lord Randolph Churchill, husband of Captain Wilson who is on the military staff here, came into Mafeking about 12 days ago.

Book 2
Continued There is very little sunshine in things just now. A shell struck near the women’s laager and killed a little girl of 10 and badly wounded a little boy only 7 years old. Poor little Mafeking will be a wreck. We are still doing an enormous trade but personally I do not think that Mr Weil should open the store, except for the issue of necessary rations.
3 February 1900. Today is Saturday and is the 113th day of siege. The Boers are still around us but everyone is pretty cool.
Today is Saturday Feb 18th and we are still beleaguered. We hear but little news of anything outside.

Book 3
Continuing - Today is Friday Feb 23rd. The big gun has again been moved and is now very dangerous to the town. Then of course there is local trade and although we may not now supply groceries to the public, at the same there are certain ones who can always get such things in moderation. For instance large orders have to be executed for the hospital and various officers messes.
Sunday March 4th yesterday was my birthday and I greatly missed not getting my customary congratulations from England. Yesterday morning the Boers by gun put 45 shells into the forts and town at a distance of 1 and a half miles.
People are very hungry in town. It is very hard to have to refuse people the necessities of life. Food is scarce and if I did not get my plate of porridge in the morning I should feel quite lost

Book 4
Today is Wednesday April18th and is one of the worst days I have yet seen in Mafeking. It rained pitilessly all day and it was no joke waling about up to the camp for our scanty scoff. The Boer big gun has gone away for a holiday, perhaps, but their many other guns and rifles are still pretty busy at time. But they (The Boers have no courage and never come out out their forts. They keep a respectable distance.
Monday April 23rd Still under Siege, shall be glad when I can write that we are relieved. There have been many fatal cases of typhoid in town. The hospital is choked full. We heard 3 days ago from Lord Roberts who says he thinks we can hold out until May 18th or later. Next Monday will be the 200th day.
Wednesday May 9th Oh dear this is very trying. It will be 9 months on Sunday and still unrelieved.
Thursday May 13th Yesterday was a red letter day in the annals of besieged towns in general and our little town in particular. On Saturday morning at 3:45am we were all roused by the ringing of bells and clanging of gongs. An aide de Camps rode up to our camp and asked for 15 volunteers to go to man loopholes in front of the BSA camp. I was glad of the chance and made one of the 15.
Tuesday May 15th At last we are on the eve of relief.
Thursday June 13th In this last entry he writes. I have just read the paper you sent me with account of Mafeking Relief rejoicings at home. It must have been very great. Fondest love my darlings for ever and ever Bob.

A facsimile copy of a Mafeking Mail Siege Slip dated 15 December 1899 with an order signed by Kliet. Col Vyvyan is retrieved as follows:
http://www.historicalpapers.wits.ac.za/inventories/inv_pdft/A2706/A2706-A2-33-text.pdf

The following biographical information has been supplied by the owner of these diaries:

Florence Maud Nordon MBE MBE: 1960: For services rendered under the auspices of the Over-Seas League in connection with hospitality to Commonwealth visitors. She never married and was a former Captain in the Women’s Volunteer Reserve; some papers in the Imperial War Museum. Florence’s parents were Maurice Nordon (1829-1909) and Esther Levy (1850-1919)

Bob Seems to be a Londoner, Kensington and Hampstead mentioned. Had his 22nd Birthday was in camp on 3 March 1900 so born 3 March 1878. He was a member of the Mafeking Town Guard; was on guard duty a lot and suggests he was not an officer but in the ranks. He states he paraded with rifle and bandolier with the Mafeking TG. He was an employee of Julius Weil and Co and worked in his Store. There are multiple references to the store and both the Weil brothers. Mentions near misses in the store from shells. He mentions Ben and Sam Weil in his diary.