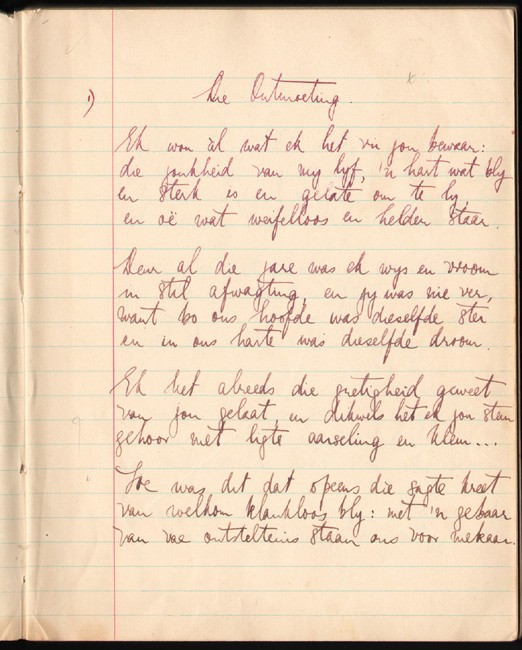 84 pages in red ink in the author's hand in a lined excercise book with a red cloth back and maroon paper covered boards. The poems are mainly written on one side of the page only. There are corrections, additions and deletions on many pages.
Elisabeth Françoise Eybers (16 February 1915 – 1 December 2007)

As one of South Africa's most celebrated Afrikaans literary figures Elisabeth Eybers was awarded the prestigious Hertzog Prize for Die Stil Avontuur in 1945.
In an article published about her in the Burger in February 1995 J C Kannemeyer described her as "die grootste lewende digter van die Afrikaanse taal" – the greatest living poet of the Afrikaans language.

The manuscript of this volume of poetry was discovered and retrieved from the office of her ex husband Albert Wessels, a well known businessman, by his personal secretary, when he requested her to clear out his office and keep anything that interested her.

Die Stil Avontuur was first published in 1939 by J L Van Schaik in Pretoria, with a 2nd impression in 1943 and a 3rd in 1945. The fact that it was published a further 6 times with several more impressions denotes its importance and popularity.

In this anthology, compiled between 1936 and 1939, she writes of the young woman in search of a life partner. The poems entitled "Die Ontmoeting," "Ontwaking" and "Dido se afskeid" encompass this theme. The happiness of being a woman and motherhood are described in a series of poems – "Portret van 'n vrou", "Voorbereiding" "Verwagting," "Vervulling", " Die Moeder" and "Die eerste nag" Though, with the birth of her first child, she was already aware of the rift in her relationship. Several poems about nature "Herfs", "Aan die lente," and "Maartmaand in Johannesberg", a recurring theme in her early poetry, are also included.

After her divorce in 1961 she moved to Amsterdam, where she lived until her death in 2007.

She formed part of the literary group known as the " Dertigers", prolific writers whose work was published in the 1930's. Other prominent figures of this period were N P Van Wyk Louw, Uys Krige and W E G Louw.

As South Africa's first Afrikaans poetess, the critics acknowledged that her work reached a new level of refinement in Die Stil Avontuur. Her contribution to this genre of Afrikaans literature has been repeatedly recognised and honoured with a host of national and international awards.