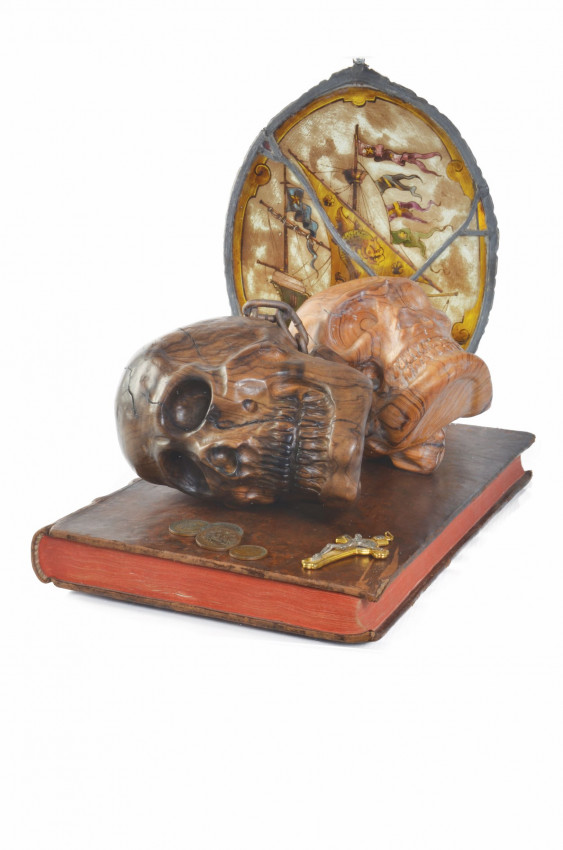 In February 2019, a collection of 60 bookworks by the sociologist-artist Jan K Coetzee was exhibited in Everard Read Gallery’s CIRCA. The bookworks bring sculpted and found objects into a dialogue with old books to reflect something of the wider social, cultural and historical structures and refrains of our times. The full collection is featured in Coetzee’s book ‘Books & Bones & Other Things’ (SUN PRESS 2018).

The bookwork ‘Dominium and Control’ is from this collection. The work consists of two life-size human skulls carved from Wild Olive and connected by a chain. The skulls are on a copy of Robert Bellarmine of Politianus’s ‘Explanatio in Psalmos’, printed by Thomas Bettinelli in Venice in 1759. Bellarmine was a Cardinal of the Roman Catholic Church and a member of the Jesuit Society. Positioned on the book are four Portuguese coins from the 19th Century and an antique crucifix. Bellarmine’s ‘Explanatio in Psalmos’ is 38.5cm long, 25.5cm wide and 4cm thick. The book consists of 443 pages and is bound in brown leather with golden embellishment on the spine. The condition of the book is very good.

The bookwork is contained in an acrylic museum case in which a stained glass panel of a sailing ship is mounted. The ship depicted on the stained glass panel is a typical example of sailing ships used in the heyday of early colonialism and imperialism of the 17th and 18th Centuries. With colonialism and exploitation runs the slave trade and forced labour. Trading in African slaves began with Portuguese, and some Spanish, traders taking African slaves to their new-found American colonies. British pirates joined in and the British were given the right to sell slaves in the Spanish Empire after the Treaty of Utrecht in 1714.

The stained glass panel refers to sailing ships as the most important vehicle of imperialist trade and exploitation. The skulls carved from indigenous wood from Africa depict the human tragedy of slavery – fueled by the obsession with profit and wealth, as referred to by the presence of coins in the installation. The coupling of a lighter and darker skull depict the lasting damage done to race and intergroup relations as a result of slavery. The crucifix reminds us of the ever-present involvement of Christian religion in colonialism and imperialism.

The stained glass panel used in this installation was collected by the Hardebeck family — Johannesburg philanthropists and socialites — during their extensive travels around 1970. In 2009 Liselotte Hardebeek set up the Umamawothando Trust to help disadvantaged students. She passed away in 2014. The crucifix was found at a flea market in London and the coins are from 19th Century Portugal.

A signed copy of the book ‘Books & Bones & Other Things’ (2018, SUN PRESS: Bloemfontein, 212pp), stitch-bound in hard cover, accompanies this bookwork, which is fully illustrated and documented on pp. 108-109.

Jan K Coetzee dedicated his working life to academia. At the age of 31, in 1979, he became a Professor of Sociology at the (then) University of the Orange Free State, then moved to Rhodes University where he spent 23 years as Professor and Head of the Department Sociology. He returned to the University of the Free State as Senior Professor in 2011. He initiated and directs the programme ‘The Narrative Study of Lives and Documents of Life’. He has published more than 70 scientific articles in accredited and international journals and authored/co-authored more than 20 book publications. He received the Vice-Chancellor’s Book Award in 2002 at Rhodes University for his books ‘Plain Tales from Robben Island’ and ‘Fallen Walls’. His latest book, published in 2019, is ‘Narrating the Everyday’ (with Asta Rau).