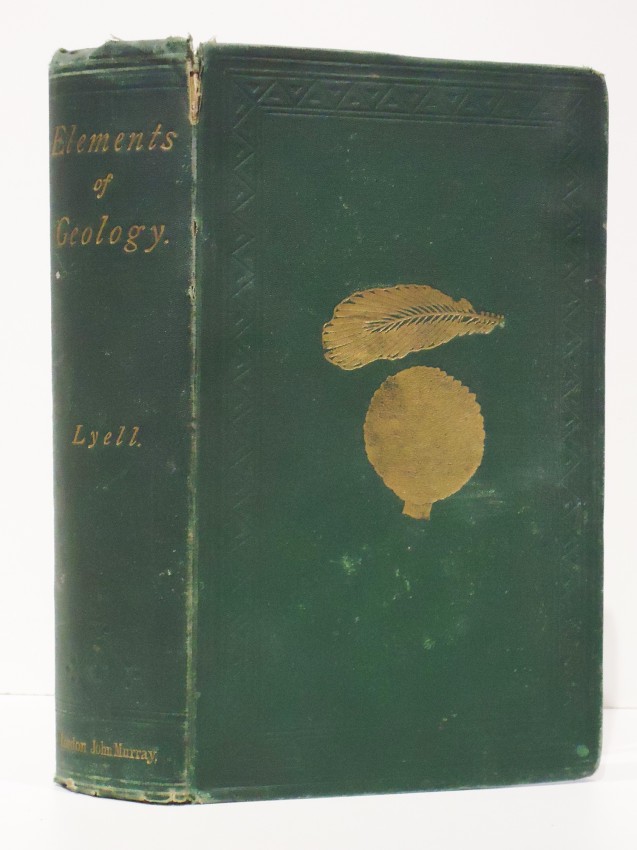 On the ancient changes of the earth and its inhabitants as illustrated by geological monuments.

Sixth edition: 794 pages + 2 pages publishers catalogue, 770 woodcuts throughout the text, starting to wear at the hinges, hand painted crest on the half title page, book binders ticket on the back free end paper, green cloth with gilt vignette on the upper cover, titled gilt on the spine, which is frayed and starting to split at the top, the cloth is worn at the edges, a good copy.

On November 14, 1797, Charles Lyell, British lawyer and the foremost geologist of his day, was born. Lyell was a close friend to Charles Darwin and is best known as the author of Principles of Geology, which popularized James Hutton's concepts of uniformitarianism - the idea that the earth was shaped by the same processes still in operation today.

Elements of Geology began as the fourth volume of the third edition of Principles: Lyell intended the book to act as a suitable field guide for students of geology. The systematic, factual description of geological formations of different ages contained in Principles grew so unwieldy, however, that Lyell split it off as the Elements in 1838. The book went through six editions, eventually growing to two volumes and ceasing to be the inexpensive, portable handbook that Lyell had originally envisioned. Late in his career, therefore, Lyell produced a condensed version titled Student's Elements of Geology that fulfilled the original purpose.
http://scihi.org/charles-lyell-principles-geology/

Sport and Service in South Africa

A BREATH FROM THE VELDT: