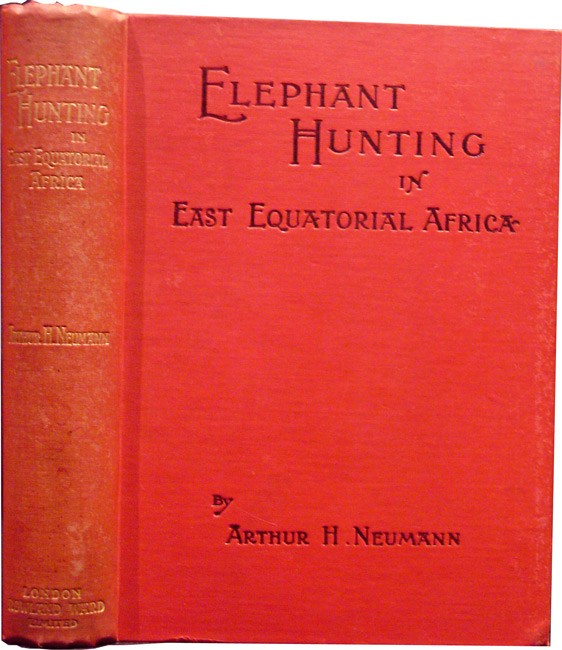 xix, 455 pages, 8 pages of Rowland Ward’s publications (a lengthy newspaper obituary of  Neumann  by J.G. Millais is pasted over the last two pages of the catalogue), frontispiece - \'Love-Making\' after a painting by E. Caldwell, 1 colour plate of butterflies, 62 illustrations by J.G. Millais E. Caldwell and G.E. Lodge as well as photographs, folding map in pocket in back cover, original maroon cloth titled in black on the upper cover and in gilt on the spine (the spine is slightly faded) and with the distinctive Rowland Ward black zebra-patterned endpapers, signature of a previous owner on the half title page,  a very good copy.

Czech: An annotated Bibliography of African Big Game hunting Books, 1785 to 1950, page 122, ‘Neumann hunted through British East Africa, hunting rhino and oryx near the Mackenzie River, then traveling to the Jambeni Range for elephant, impala, and rhinoceros. Near Mt. Kenia, he bagged numerous elephant and also collected rhino and lion. In Ndorobo territory, he stalked more elephant, particularly near Seya River. On a second expedition, this time toward the Tana River, he bagged elephant, then returned to Ndorobo lands for further tuskers. On a trek toward Lake Rudolph, Neumann collected topi, lion, rhino, hippopotamus, giraffe, and a variety of plains game. The coloured plate of butterflies was highly prized by entomologists and was often removed.’