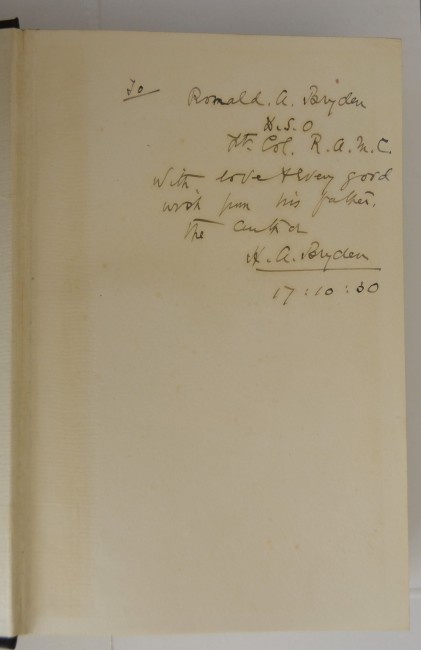 Enchantments of The Field - H.A. Bryden - Important Association Copy Inscribed to his Son.

Tweet
Email or share
Henry Anderson Bryden was British and the grandson of William Cowper. However, he spent much of his time living in Africa, and he gave up his profession as a lawyer to become a professional writer. His books on Game and Hunting in Africa are well known and widely collected. These include Wild Life in South Africa, Gun and Camera in Southern Africa, Great and Small Game of Africa (with Lydekker) and Kloof and Karroo amongst others. This volume is subtitled "Chronicles of Sport and Wild Life", and although not exclusively on Africa, it has several African Chapters ie. Elephants and Ivory, Sea Fishing at the Cape of Good Hope, Big Game Hunting and Morning on An African River. It also has chapters on hunting in Britain, the US and France. Bryden's obituary in the Times was headed "Sportsman, Athlete and Naturalist". In the obituary, this book, The Enchantment of the Field, was noted as his best work. MOST NOTABLY, this is a wonderful inscribed presentation copy to his son Lt.Col.Ronald A.Bryden DSO, RAMC. (see image). The book is clean and tight in the original gilt titled black cloth which has one tiny (2mm.) area of early fraying in them mid rear joint. There is moderate foxinig of the edges but only a little inside the book. A nice copy. 286pp.

Two typescripts: 1. “Moose Hunting from a Woman’s Angle” and 2. “Our First Vacation –&hellip;

Diary of a nurse in South Africa