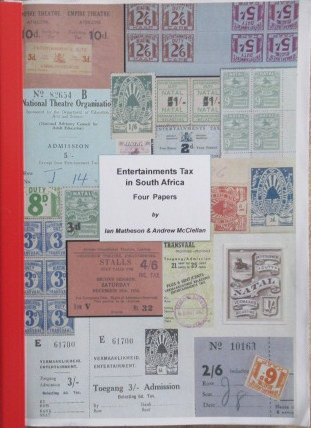 Governments are always looking for profitable ways of raising tax revenue with minimum impact on their acceptability to the voters. Taxation of essential expenditure never attracts a thumbs-up from the electorate. However the so called "sin taxes" on liquor or cigarettes are considered to be more acceptable as they are taxes on discretionary spend, which should be made after essential expenditure has been made. The imposition of taxes on entertainment falls into this category and is very tempting to our fiscaL authorities.

In the South African States before Union in 1910 licences were required for billiard and bagatelle tables. All taverns had to pay for an annual licence. The Orange Free State collected taxes on liquor sales at theatres. However these taxes are collected from the proprietors of the establishments. The entertainment duty described in these pages was frequently (but not always) collected from the patrons.

On the information of the Union of South Africa on 31st May 1910 some taxation was centralized and became standard across the Colony, but entertainments taxation was at the discretion of individual Provinces.