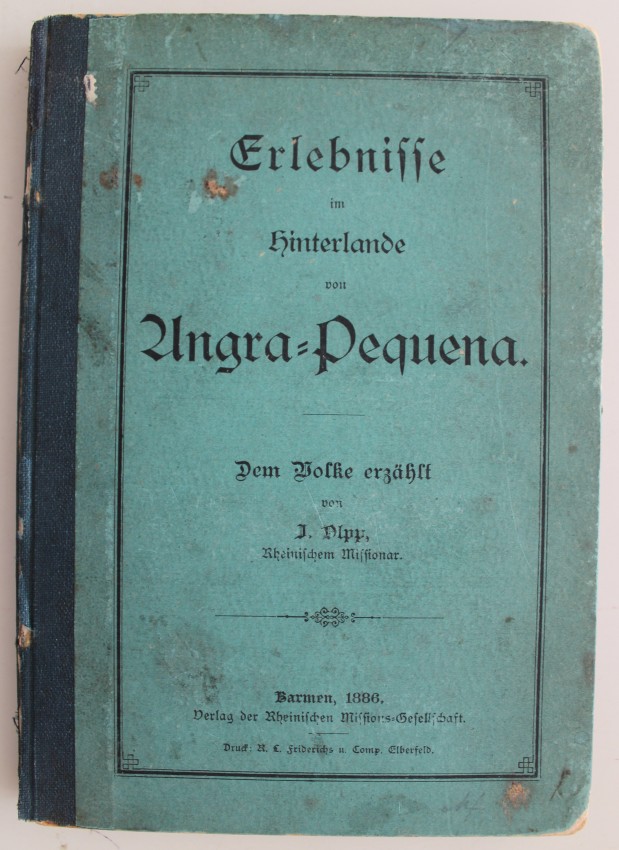 Johannes Olpp (Snr.) was born on 05.07.1837 at Merklingen near Stuttgart in Germany. He was the son of a baker. He was a tailor who was sent to Namibia by the Rheinische Missionsgesellschaft after being ordained on 10.08.1864. He was stationed at Berseba from 1865 to 1868 as assistant to missionary Johann Georg Krönlein.

He went on exhausting journeys through Namaland to explore virtually unknown areas and always tried to get in touch with the Nama communities. Studying assiduously, he gradually mastered the difficult Nama language. He was also interested in tribal customs. For the sake of his studies he stayed at Bethany, Hoachanas, Rehoboth, Otjimbingwe, Otjikango, Okahandja, Otjizeva, Windhoek, Keetmanshoop and Warmbad and even crossed the Oranje River to the north-western areas of the Cape Colony, where he visited Steinkopf, O'okiep, Concordia, Springbokfontein and Port Nolloth. On 09.01.1868 at Gibeon, he succeeded Rhenish missionary Jacob Knauer who had left Gibeon on 27.11.1867. By that time the Namaland conflicts of the 1860s had also reached Gibeon and had destroyed the station. Olpp worked determinedly to restore the mission works and re-establish Gibeon's scattered residents. Even the aging Captain, Kido Witbooi, asked to be prepared for baptism and was consequently baptised. In 1876 a new church was consecrated. Olpp served the mission station Gibeon until 1879 when he left Namaland for health reasons, and after initially being an agent for the RMS in Herford as from 1883, he was responsible for the Girl's School in Herford from 1889 onwards. While in Gibeon, he was teaching Hendrik Witbooi, and developed a friendship with him which they continued through correspondence after Olpp's return to Germany. Olpp also continued to defend Witbooi in correspondence with other missionaries as well as to the German public. Apart from Hendrik Witbooi, he also taught and baptised other prominent leaders such as Hendrik Witbooi Jnr. and Samuel Izaak. He was married to Luise Wagner on 18.06.1867. They had seven children, one of whom also became a missionary in Namibia, Johannes Olpp (Jnr.). He died on 13.02.1920 at Herford. (Klaus Dierks)