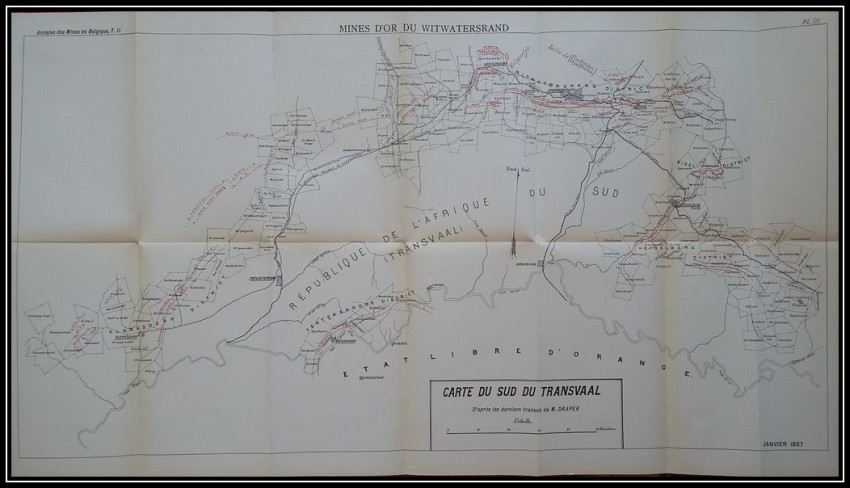 "Technical Study on the gold mines of the Witwatersrand" by Dr. Leon Demaret. Extremely rare copy of this precious work, hard to find even in National and University Libraries!

Dr Léon Demaret was His Majesty's Inspector of Mines at Mons, Belgium. His early papers (written in French) dealt with the exploitation of coal in South Staffordshire, England (1891); some examples of the use of electricity in mines (1891); and the mechanical preparation of ore in Cornouaille, western France (1893). In 1895 he published an extensive paper on gold in South Africa, "L'Or dans l'Afrique du Sud", in the Belgian Revue Universelle des Mines.... Two years later he produced a technical monograph on the gold mines of the Witwatersrand, Etude technique sur les mines d'or du Witwatersrand. It included a map, plans of mines, and diagrams. At a meeting of the Geological Society of South Africa on 14 December 1897 a short contribution by him was read, titled "On the extension of the Main Reef eastwards, beyond Vogelfontein and on the nature of the Rietfontein Reef" (Transactions, 1897, Vol. 2, pp. 143-144). The author states that this paper is based on "a theoretical study, not made on the ground", and presents evidence for his view that the reef at Rietfontein is the extension of the Main Reef. Thus it seems that his work was based on the available literature and that he never visited South Africa. By 1899 he had been elected an honorary member of the Geological Society of South Africa.Demaret subsequently published papers (in French) on copper deposits (1900), zinc minerals and mining in the United States (1904), mercury mines (1904), manganese mines (1905), the origin of mineral veins (1906), and petrolium in Romania (1908); a French atlas of economic geology (1914); and a work on the financing of mines (Brussels, 1932). (http://www.s2a3.org.za/bio/Biograph_final.php?serial=694)