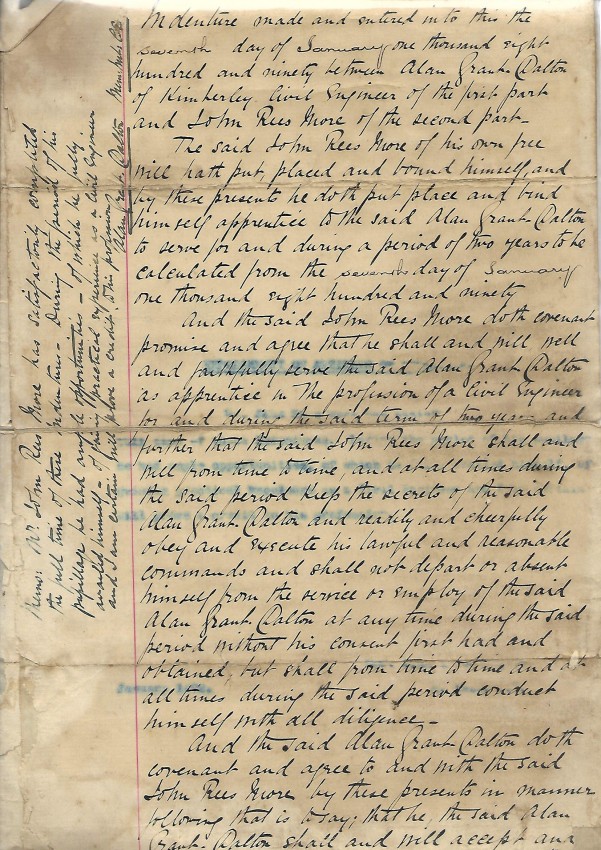 Various – including John X.Merriman, J.C. Smuts, C.W. Malan and others

Scrapbook book including many autograph letters including John H. Merriman (14), documents, notebooks, photographs and ephemera, some of Anglo-Boer War interest.

This remarkable lot is housed in a large lever arch file containing 107 plastic sleeves and as many items - comprising autograph and typed letters, documents, government reports, booklets, notebooks and ephemera. They all relate to the John Rhys More who became the General Manager of South African Railways from 1927 - 1933. The archive/album seems to have been compiled by his son, T.V. More who also became employed by the Railways (or possibly by J.R. More’s wife). The time span covered is from 1897 to 1963 (the date of T.V. More’s retirement).

Here is a potted biography of J.R. More:

It is difficult to adequately describe the extensive contents of this archive. Of particular interest are:

- 14 autograph letters signed by John X. Merriman to More, dated from 1907 to 1918 on a variety of topics and varying from one to several pages in length, some very detailed. One extract from the letter dated 25/07 "I am quite sure that someday and the sooner the better that (the) country will be a white man’s country. As far as preaching goes, I always advertise its merits and if I were a younger man I should try my hand…….". Please note that at least 6 of these Merriman letters are in very good condition. The others have varying degrees of fraying and staining.

- One 2pp. als. from General J.C. Smuts to More dated 7 Jan. 1933 "written in great haste". This letter is stained and somewhat defective with a large chip of the one edge.

- A most interesting item is a circa 22cm. sq. handmade booklet entitled "Cape Government Railways. Report of Acting District Engineer, Bulawayo. Transvaal War, 1899 - 1900." This comprises 28pp. of hand typed text with handwritten titles in black ink and underlined in red. Hand signed in ink "Obediently Yours, H.Wallis, Actg.District Engineer". Various military operations are described as is the construction and repair of several bridges. Interleaved are 11 pages with original photographs of military interest including one with Baden-Powell (varying sizes) laid down. These are all hand titled. Tipped into the rear of the book is a lovely folding blueprint map of "Military Operations at Crocodile Pools" – in nice condition. Please note the condition of the book: The paper bound covers are water stained, the staples are rusted and the covers are coming adrift from the rest of the book, Internally the condition is generally reasonable.

- A 2pp. official South African Railways document regarding the Royal Tour of 1847 (plus some other paraphernalia re tour.

- In addition to the above there are numerous letters, documents, railway timetables, forms and newspaper cuttings relating to the appointment of More to his various positions. There are also a couple of parliamentary memoranda from 1916 re "The Control and Management of Railways and Harbours".

Altogether this is a most interesting and important archive. BUT - PLEASE NOTE - many (but by no means all) of the items are in poorish condition with frequent evidence of water damage, staining and fraying with a few being defective. The archive is being sold with all faults. I have only supplied selective details and will be happy to answer any requests for further information. I have, however, supplied many images in an attempt to convey the general feel of the archive.