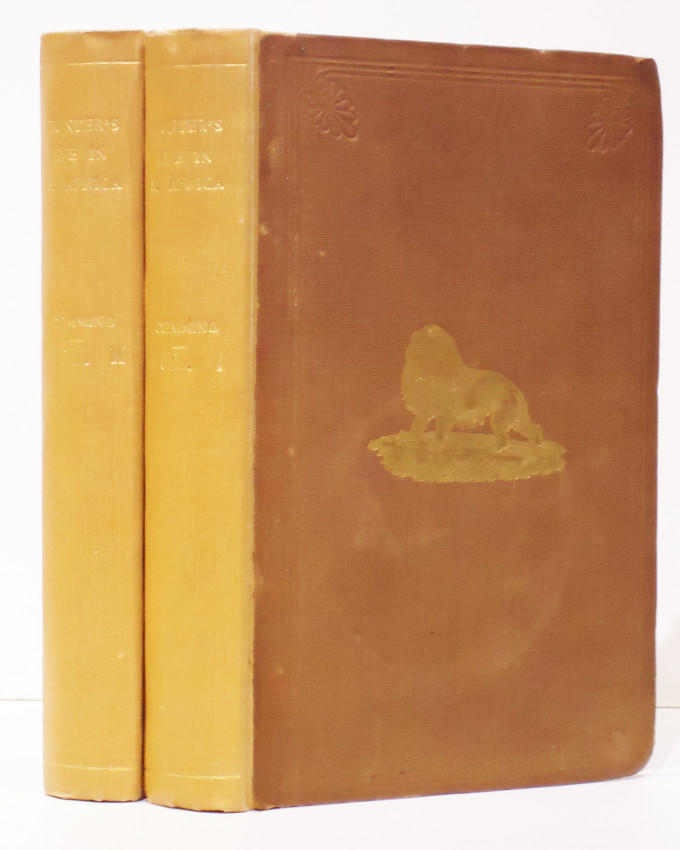 With notices of the native tribes, and anecdotes of the chase of the Lion, Elephant, Hippopotamus, Giraffe, Rhinoceros, Etc.

First edition. 2 volumes, 386 + 370 pages, engraved frontispiece and added title page in each volume, map, 12 plates, - the plate opposite page 132 in volume 2 is torn at the edges, working loose at the front hinge in volume 2, foxing throughout and on the page edges, uncut edges, brown cloth boards with a gilt vignette of a lion on the upper cover and blind tooled decoration of buck horns on the back covers, rebacked in a lighter brown cloth titled gilt on the spines, the corners are bumped, a good set.

Mendelssohn (Sidney) South African Bibliography volume 1, page 399: A hunter and sportsman from boyhood, Cumming was in his element in South Africa, which was a regular hunter's paradise in the first half of the nineteenth century. His youth was passed in the county of Moray, and after finishing his education at Eton, he joined the 4th Madras Light Cavalry. In 1839 he sailed for India and, touching at the Cape, had a foretaste of the splendid sport that he was able to enjoy there in later years. The climate of India did not agree with him, and he left that country and spent a few years hunting in Scotland and America, where he obtained a commission in the Royal Veteran Newfoundland Companies. He exchanged into the Cape Riflemen in 1843, and after some uneventful months spent under Colonel Somerset in Kaffraria, he sold out of the army and decided " to penetrate into the interior farther than the foot of civilised man had yet trodden to vast regions which would afford abundant food for the gratification of the passion of my youth, the collecting of hunting trophies and objects of interest in science and natural history.

The narrative is valuable for the account of the state of the country at this period, as well as for the excellent description afforded of the natives of the interior, and of the up-country Boers, while the interesting zoological and botanical notes give added value to the work. After five years of incessant travel the author returned to England, taking the Cape waggon which had accompanied him throughout his journeys, and his large collection of trophies, the whole weighing about thirty tons.