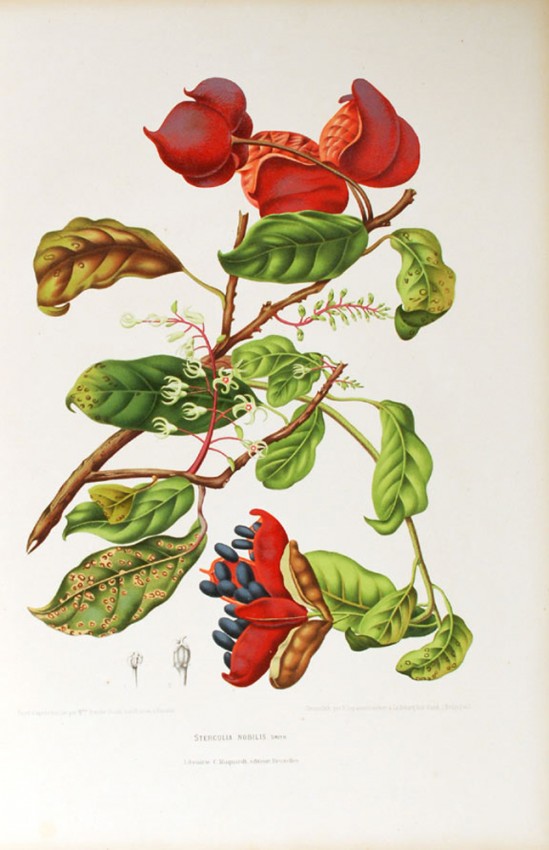 First edition: title page, dedication, preface, 40 chromolithographic plates plates by G. Severeyns after paintings by the author, each with facing page of descriptive text in both English and French in columns. Original red embossed with gilt titling and within a floral border, binding by G.J. Lebbing, bookbinder, of Amsterdam (expertly rebacked preserving the original backstrip and lightly worn at the corner). light foxing on the text leaves and occasionally on the plates, overall a very good copy.

Tomasi (Tongiorgi Lucia) An Oak Spring Flora, (Upperville Virginia, Oak Spring Garden Library. 1997) pages 330/1, Describing the third edition of 1880 '...a work that the Belgian artist Bertha Van Nooten produced around 1862 while she was living in Batavia (now Jakarta) on the Indonesian island of Java. The forty large plates in Fleur, Fruits et Feuillages Choisis d l’Ile de Java were printed in Belgium from Van Nooten's original sketches by P. Depannemacker, using the new technique of chromolithography. Each plate is accompanied by a text in French and English that describes the plant and its history and enumerates its medical properties. Often enlarged details of the flower and fruit are included. Van Nooten was clearly a more than competent artist, for the splendid tropical plants, with their lush foliage, vividly coloured flowers and exotic fruit, have been depicted with great skill. She managed to accentuate the splendour of each species by adopting a style that combined great precision and clarity with a touch of neo-Baroque exuberance, revelling in the rich forms and colours of the tropic. The reader's eye is immediately captured by the dark leaves, shown furled or crumpled or partly nibbled away by insects, the delicately rendered details of the follicles and seeds, and the heavy clusters o flowers that cascade down the page. The excellent reproduction of the artist's drawings in the form of chromolithgraphs lends added tactility to these striking images.’

https://en.wikipedia.org/wiki/Berthe_Hoola_van_Nooten 'Berthe was the daughter of Johannes Wilhelmus van Dolder, a vicar, and his wife Philippina Maria Batenburg. On 11 July 1838 in Wageningen, she married Dirk Hoola van Nooten, a judge in Paramaribo. Interested in botany, she regularly sent specimens of cultivated plants to botanical gardens in the Netherlands, collected on trips through Suriname with her husband. She and her husband later moved to New Orleans where they established a Protestant school for girls connected to the Protestant Episcopal Church. Personal tragedy struck with her husband's death from yellow fever in 1847, leaving her with a young family of five. She was judged competent by the church and allowed to continue the school.

After a stay in Europe the New Orleans school was re-established in Plaquemine, Louisiana, in 1850.[2] She then moved to Galveston. In January 1854 The Galveston News reported that Mrs. van Nooten's Young Ladies Institute, for which she purchased a 'large and handsome residence', was operational. In October and November 1855, however, the same paper published repeated court orders for B. H. van Nooten, who had argued she was not a resident of Texas, to appear for the Justice of the Peace to answer to creditors. She then travelled to the island of Java with her brother, a highly successful merchant in the business of sugar, machines and life insurance. Having arrived in Java she applied for a Government subsidy for setting up a Protestant girls school to countenance the influence of Roman Catholic seminaries.

Hoola van Nooten was also interested in the local flora of Java and gave drawing lessons. She produced 40 plates depicting interesting plant species from Java, following the precedents set by Maria Sibylla Merian and Elizabeth Blackwell. The drawings would make up the illustrated work Fleurs, Fruits et Feuillages, choisis de l'île Java: peints d'après nature. The illustrations are accompanied by descriptions in French and English, describing the plant's history and uses. The work was published in Brussels in 1863, and was dedicated to Sophia Mathilde, wife of King William III of the Netherlands, whose patronage she had acquired. Although the book was published in a number of editions, Hoola van Nooten died in poverty in Tanah Abang at the age of 74. The Hoola van Nooten family name is today respected in the Netherlands, and is listed in the Nederlands Patriciaat, a register of Dutch families who have played a significant role in Dutch society over the past 150 years.'

NYASALAND CALLING - A Travel Guide To The Nyasaland Protectorate (1948)

Moçambique. Directorate of Services of Economy and General Statistics.

HOW TO INVEST IN MOÇAMBIQUE.