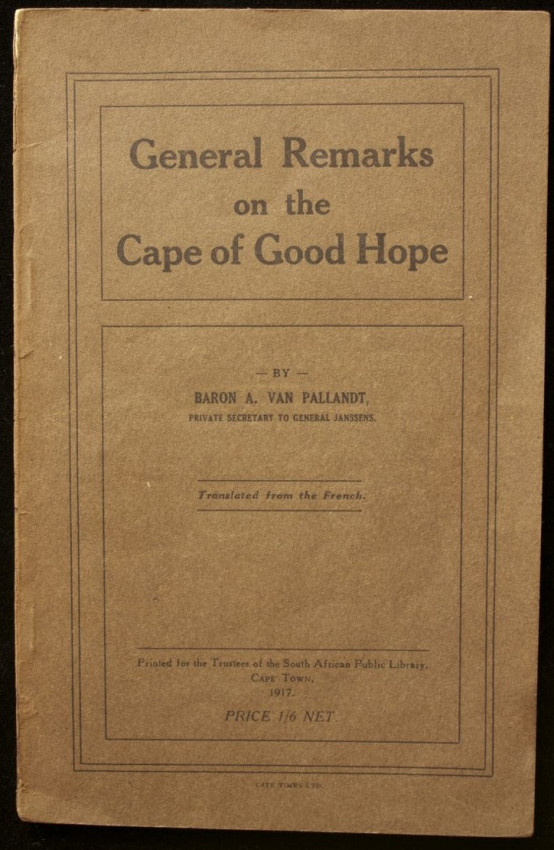 General Remarks on the Cape of Good Hope (the forerunner of the Van Riebeeck Society publications,1917)

In Frank R. Bradlow's booklet on the history of the Van Riebeeck Society he writes:

'With the money remaining in the publication fund after the publication of the Diary of Adam Tas, and with the money recovered by way of royalties on its sale, the Trustees of the Library decided, some three years later, to publish a translation of Baron van Pallandt's General Remarks on the Cape of Good Hope, the original of which, in French, was very rare. This document had been suppressed by De Mist in 1803. This modest publication of forty pages was published by the Library itself in 1917. It was printed in Cape Town. Its publication was to have an unforeseen consequence. It resulted in the formation of the Van Riebeeck Society.

The real cause of the founding of the society was a speech made by the Prime Minister General Hertzog. The diary of van Pallandt, who was secretary to General Janssens (about 1803), had just been published on the initiative of the Trustees of the SA Library. There were passages in this diary which met with the disapproval and roused the anger of General Hertzog, and the latter, in the course of a speech in the Chamber, strongly attacked the Trustees of the SA Library in respect of this publication.

The immediate result of this attack was that the edition of the diary (sic) - was sold out the following morning. One member of parliament alone sent round for 150 copies of the work. He, needless to say, was an opponent of General Hertzog.

The unexpected success of the publication of van Pallandt's diary (sic) - a success very largely due to General Hertzog's attack - put into the hands of the Trustees a considerable sum of money. It was suggested that the Van Riebeeck Society be formed. General Hertzog accused the Trustees of publishing the pamphlet from political motives and recommended that the government grant to the Library be withdrawn.

The passages in van Pallandt's booklet, to which General Hertzog objected, referred to the bad treatment by the settlers of the aboriginal Hottentots or Khoikhoi, as they are today known.'

Originally fifty copies were struck off in 1803, without the sanction of the Governor, Jacob Abraham de Mist. They were ordered to be destroyed but a single copy survived. This copy was translated into English from the original French and published in 1917 and today this booklet is considered to be the forerunner of the Van Riebeeck Society publications.

Antic Memories: Highveld and Bushveld - In War and Peace (Inscribed by Author)

Political Cartoons - reprinted from the Star, together with a complete Portrait Gallery of the&hellip;

HOLISM AND EVOLUTION - FIRST US EDITION IN DUSTWRAPPER WITH AUTOGRAPH LETTER