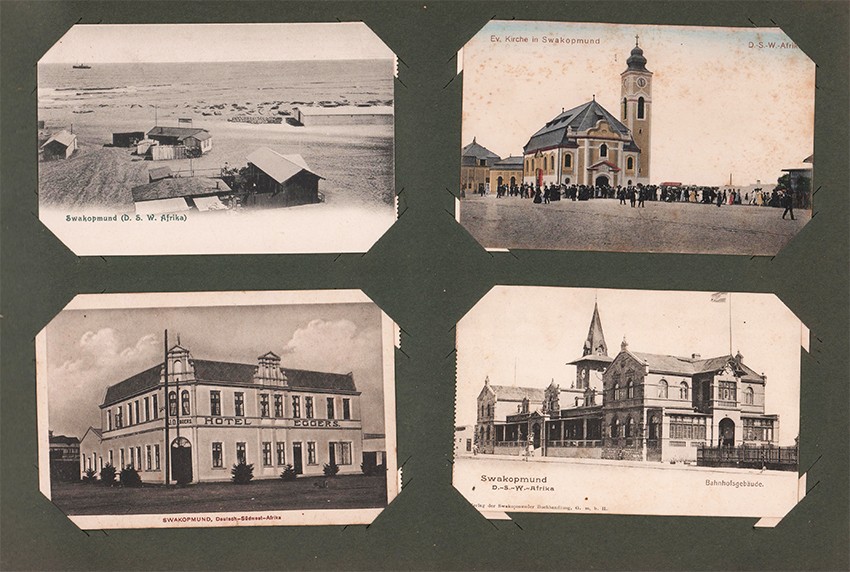 229 postcards mounted in an album, half red leather titled gilt on the upper cover with matching cloth boards. The exterior of the album is in very bad condition - the spine is missing, the upper cover and front free endpapers are detached - the leather chipped and worn, but the contents are bright.

All the postcards have captions, some are dated - several are in full colour, others sepia-toned and also black and white. Most are not postally used.

The album consists of the following:

On some of the Swakopmund postcards there appears "der Swakopmunder Buchhandlung" This bookshop is still extant in Swakopmund.

There are also 9 loose postcards inserted on the front of the album with messages by his family members posted in 1915, which includes a full colour panorama of Usakos in 3 parts – torn slightly at the top of the of 2 of them.

The album was compiled by his parents and presented to him in December 1915 on his return from the GWA campaign.

The presentation inscription on the front paste down end paper reads: To dear Harry, With love from Dad and Mother Xmas 1915 Information supplied by John Grice. Hillcrest, KwaZulu Natal.

German South West Africa (German: Deutsch-Südwestafrika) was a colony of the German Empire from 1884 until 1919. With an area of 835,100 km², it was one and a half times the size of the mainland German Empire in Europe at the time. The colony had a population of around 2,600 Germans.

In 1915, during World War I, German South West Africa was invaded by the Western Allies in the form of South African and British forces. After the war its administration was taken over by the Union of South Africa (part of the British Empire) and the territory was administered as South West Africa under a League of Nations mandate. It became independent as Namibia in 1990. https://en.wikipedia.org/wiki/German_South_West_Africa