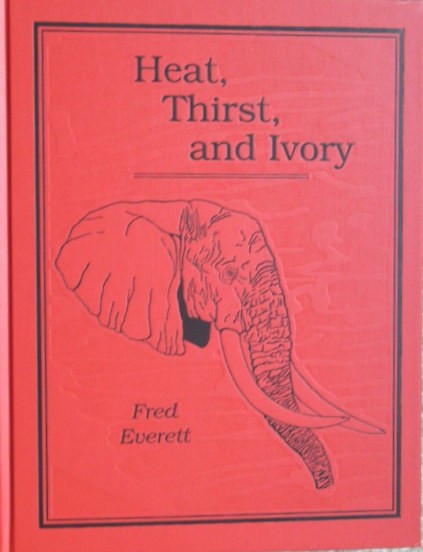 Elephant and Other Hunting Adventures in Botswana, Zimbabwe and Angola

Red boards with black outline and elephant head logo to upper board, and black lettering to spine. Complete with slipcase.

Fred Everett was born and grew up in the northern territories of what was known then as the Bechuanaland Protectorate, a place renowned even today for its game. His backyard was the Chobe and the Okavango Swamps, where Everett was free to roam and where he learned to hunt with an old 7 x, 57mm Mauser. As Everett says, "So I began my career as a hunter in November 1932. Unable to adjust to the world among his own people or even a life at home, I shed the trappings of civilization like a python sloughing its skin. I moved into the bush among the animals that accepted me in my role as predator. Elephants were the only lucrative animals to hunt. As I would be poaching, I would have to be selective and take on the largest ivory, for I could not afford to draw attention to my activities by leaving too many carcasses strewn around."

Frederick William Everett is known as one of the last great professional ivory hunters still alive today. In fact, Peter Capstick once said of Fred Everett, " He is truly one of the last grand characters of the African bush." Not many people can have a ringing endorsement like that! During his long hunting career, he hunted in Bechunaland, Southern Rhodesia and the Wankie Game Reserve, Mozambique, and Sudan, shooting scores of elephants. An unusual life and a great story. Foreword by Brian Marsh, and artwork by J. Enrique Lacuesta Bone.

This is volume thirty-eight in Safari Press's Classics in African Hunting Series. Signed and numbered 310 of 1000 copies.