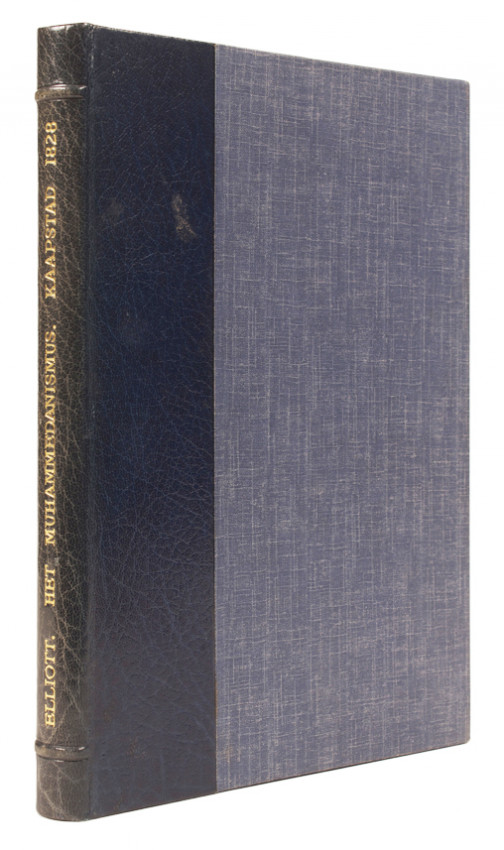 First edition: 101 pages, faded blue paper wrappers with a water stain at the bottom of the front cover, housed in a specially made solander box with a dark blue leather spine, titled gilt on the spine, a good copy.

Mendelssohn (Sidney) A South African Bibliography vol. 1 page 517: According to the South African Almanac of 1830, Mr. Elliott was an honorary member of the South African Missionary Society ; the meeting- house referred to at the " Hoofdplaats " was probably situated on what is now known as the Grand Parade, Cape Town.

William Elliott 22 September 1792 – 25 November 1858 was sent out to the Cape Colony in 1820 by the London Missionary Society. That same year a William Elliott, presumably him, applied to the government for permission to open a classical and commercial academy, but nothing seems to have come of this. He joined the church of John Philip in Cape Town, but was soon transferred to the Comoro Islands. However, as there was no opening for him there he returned to the Cape in 1822. Returning to England in 1824 he was ordained in Sheffield "to the work of a Christian missionary to the Malays and other heathens in and about the Cape of Good Hope" (The Evangelical Magazine and Missionary Chronicle, February 1825, p. 70). He returned to Cape Town in 1825 under the patronage of the South African Missionary Society, with the encouragement and assistance of the London Missionary Society. He was at home in Greek, Hebrew, Latin, Dutch and English, and was also a musician. In addition to some sermons he published a series of eight lectures on a comparison between Islam and Christianity (Cape Town, 1828).http://www.s2a3.org.za/bio/Biograph_final.php?serial=861