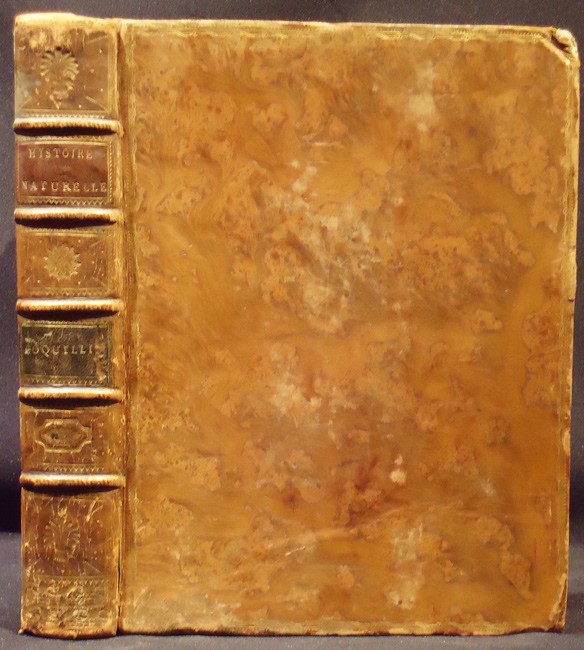 In two sections: Voyage au Se?ne?gal & Histoire des Coquillages:
(viii), 190, (ii), xcvi, 275 pages, folding map (Carte Generale du Se?ne?gal), 19 engraved folding plates of shells, contemporary full tree calf, spine with contrasting title labels and gilt decorated in panels, marbled endpapers. The leather is splitting at the base of the upper joint but the endpapers are intact and the binding firm, the leather is rubbed along the edges and bumped and worn at the corners, two book plates on the front paste-down endpaper, small stain on the title page but otherwise the contents and plates are crisp and bright.

Michel Adanson (1727–1806). French naturalist of Scottish descent. Funded by a director of the Compagnie des Indes, he left France on an exploring expedition to Senegal. He remained there for five years, collecting and describing numerous animals and plants. He also collected specimens of every object of commerce, delineated maps of the country, made systematic meteorological and astronomical observations, and prepared grammars and dictionaries of the languages spoken on the banks of the Sénégal.

After his return to Paris in 1754 he made use of a small portion of the materials he had collected in his Histoire naturelle du Senegal (1757). Sales of the work were slow, and after the publisher’s bankruptcy and the reimbursement to subscribers, Adanson estimated the cost of the book to him had been 5,000 livres, beginning the penury in which he lived the rest of his life. (Wikipedia).

Lectures and Commentaries Upon Biblical and Talmudic Passages