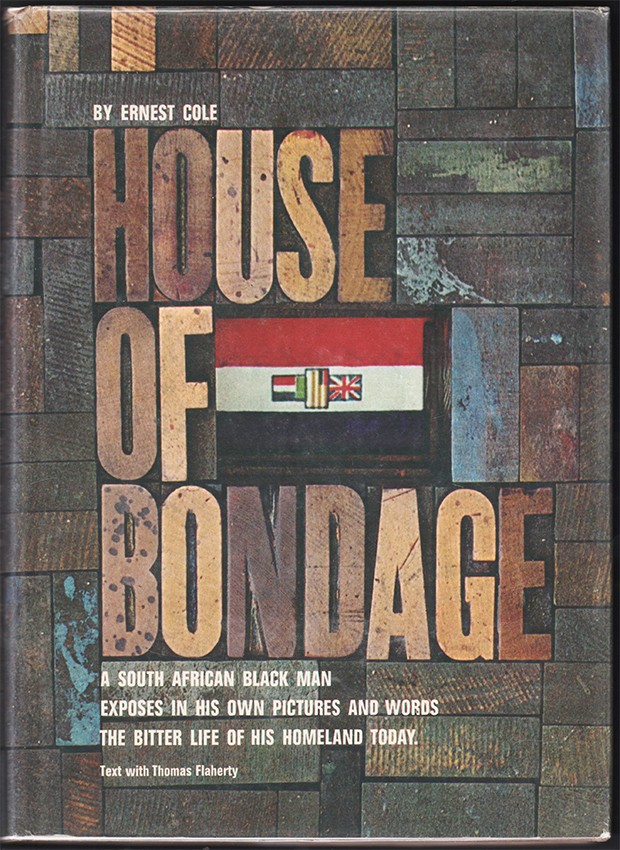 A South African black man exposes in his own pictures and words the bitter life in his homeland today - Text on the dust jacket. With Thomas Flaherty Introduction by Joseph Lelyveld.

192 pages, prolifically illustrated with black and white photographs, white buckram gilt on upper cover, a very good copy in the dust jacket which is now preserved in a protector.

Ernest Cole was born on 21 March 1940 as Ernest Levi Tsoloane Kole, in Eersterust, Pretoria. He left school when Bantu Education was introduced, and unsuccessfully attempted to complete his Matric (Grade 12) via correspondence through Wolsey Hall, Oxford, due to financial constraints.

In 1958, Cole went to Jurgen Schadeberg - Drum magazine’s chief photographer - and asked him for a job. Schadeberg took him on as his assistant in design and production. During this time, Cole registered for a correspondence course with the New York Institute of Photography. With help and encouragement from the staff at the Institute, his idea of recording apartheid in South Africa was nurtured.

After Drum, he moved on to the Bantu World newspaper (later called The World and now known as The Sowetan) where he was given a job as a photographer. In the early 1960s, he started to freelance for clients such as Drum, the Rand Daily Mail, The World and the Sunday Express. Cole was therefore South Africa’s first black freelance photographer.

Cole managed to outwit the Race Classification Board when he was re-classified as a Coloured by changing his name from Kole to Cole. This gave him more privileges and he was soon able to leave South Africa. On 9 May 1966, he left for France, England and New York to showcase his apartheid project and photographs. On the 10 of September 1966, he arrived in New York. He visited the reputable agency Magnum Photos and showed them his photographs. They were so impressed with the images that they organised a publishing deal with The Ridge Press Inc., which in turn sold the publishing rights to Random House. His book, "House of Bondage", was published in 1967 and was banned in South Africa, although a few copies did manage to get smuggled into the country.

This series of photographic essays, set in the 1950s and 1960s, is an indictment of the inhumane conditions under which black South Africans were forced to live during apartheid. The collection is seen as Cole’s single greatest achievement, as he was the first photojournalist to expose to the world the stark realities of life under the apartheid regime. In 1968, Cole was banned from South Africa and settled in the United States.

In the book, Cole writes: "Three-hundred years of white supremacy in South Africa has placed us in bondage, stripped us of our dignity, robbed us of our self-esteem and surrounded us with hate." After some time Cole moved to Sweden where he took up filmmaking. Although he stopped taking photographs, those he had taken were still being used extensively by the African National Congress (ANC) in their newsletters and magazines such as Sechaba. Some were used in books issued by the International Defence and Aid Fund, as well as the UN Special Committee against Apartheid. In January 1990, Ernest Cole was hospitalised with terminal cancer. On 15 February 1990, his mother left South Africa for the United States to visit him in hospital. He died 2 days later on Saturday 17 December 1990. http://www.sahistory.org.za/people/ernest-cole