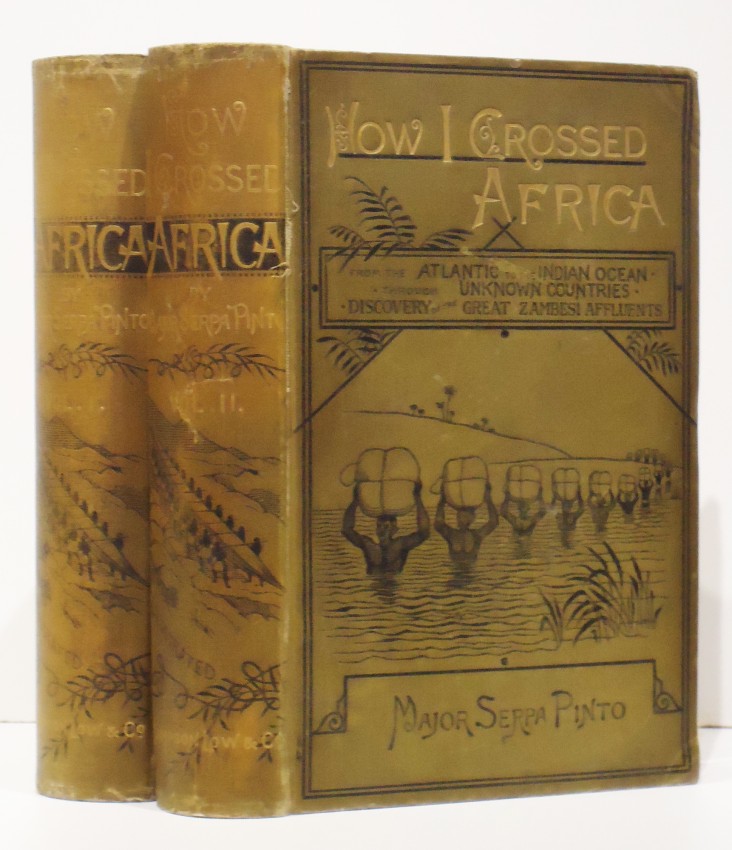 HOW I CROSSED AFRICA

From the Atlantic to the Indian Ocean through unknown countries;

Translated from the author's manuscript by A. Elwes

In two volumes containing 15 maps and facsimiles and 132 illustrations

First Edition.2 volumes. 377 + 388 pages, folding map as frontispiece and folding map in pocket at back in vol. 1, maps and diagrams, numerous plates and illustrations, bookplate of Frikkie Botha on the front paste down end papers in both volumes, pictorial green cloth titled gilt on the upper cover and spine – the volumes have been rebacked preserving the original back strip and the cloth has faded to brown , the corners are bumped especially in volume 2, which also has a uncut edges, a good set.

Mendelssohn (Sidney) South African Bibliography volume 2 page 168 -169: The author was chosen by the Portuguese Government to take a leading position in the expedition sent by them to explore South Central Africa. Messrs. Capello and Ivens were also associated with the expedition, but the travellers parted company in 1878, and Serpa Pinto went his own way.

He arrived at Loando on August 6, 1877, and his long journey to the Indian Ocean was made in intervals between attacks of fever which often threatened his life. He was careful, however, to keep accurate observations throughout, and nothing in the way of illness seems to have interfered with these valuable records. He travelled from Benguella to the Upper Zambesi, and thence through the Kalahari to Khama's Country and the Transvaal. The narrative includes detailed accounts of the native chiefs and their subjects along the route, and is full of all kinds of adventures, the journey having been carried out in the face of exceptional difficulties and privations.

When the kingdom of the Barotse was reached, Serpa Pinto's affairs eventually came to a desperate pitch, owing to the treachery of King Lobossi and some of his counsellors, and his camp was attacked by the natives, who, however, were beaten off by his faithful followers. Later on the King provided him with boats and he escaped from the country, and soon after was informed of the whereabouts of the well-known missionary, Coillard, to whom he resolved to go for assistance. After many more troubles he succeeded in reaching " Luchuma," the camp of Mr. Coillard, in an almost exhausted condition, but he soon recovered under the kind treatment of the ladies of the missionary's family. He subsequently visited the Victoria Falls, and eventually joined his hosts in a journey to Khama's Country, where the explorer met with friends, who provided him with funds enabling him to make his way to Pretoria, where he resumed communications with the Portuguese Government, and was warmly received by both Dutch and English.