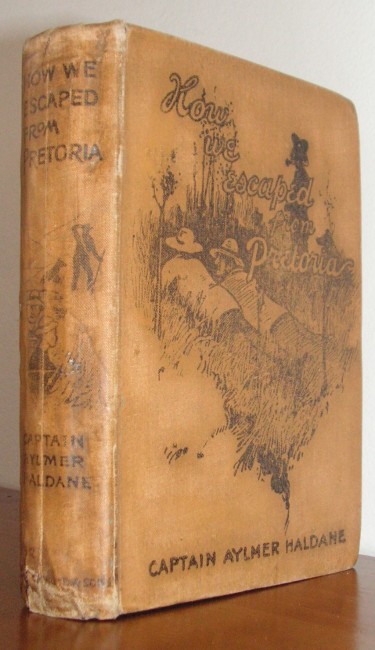 How We Escaped From Pretoria

Email or share
'New edition, revised and enlarged, with numerous illustrations, plans and a map'. Crown 8vo; original khaki pictorial cloth; pp. xii + 231; plates; plan; folding map showing 'Pretoria to Komati Poort Railway' and 'Pretoria to Witbank'. Re-cased, with new front endpaper; cloth rather worn and corners turned; tail of spine stiffened somewhat through re-casing; spine a bit cocked; lower hinge a little tender; trace of damp-stain to edges of a few leaves; occasional fox spot; earlier owner's hand-stamp to first page of the account. (Hackett, p. 150) "The prisoners were taken to the Staats Model School at Pretoria, and Churchill, Brockie, and Haldane made many plans to escape, which were doomed to failure, but eventually Churchill got away on December 12th; the others were observed by a sentry, and dared not make the attempt, but later on they managed to hide themselves under the floorings of the prison, and being joined by Le Mesurier, they disappeared on February 26, 1900, to the consternation and mystification of their guards, who never supposed they were hiding in the building. They were supplied with necessities from time to time by their fellow officers who were in the secret, but found no means to escape till March 16th, when all the prisoners were removed and the building deserted, when finding the coast clear, they succeeded in getting outside, eluded the few passers by, and were soon on the veld. The officers were hidden by some friends amongst bales of wool, which were put on a truck attached to a passenger train bound for Delagoa Bay, which took them safely across the border." - Mendelssohn I, pp. 669,670.