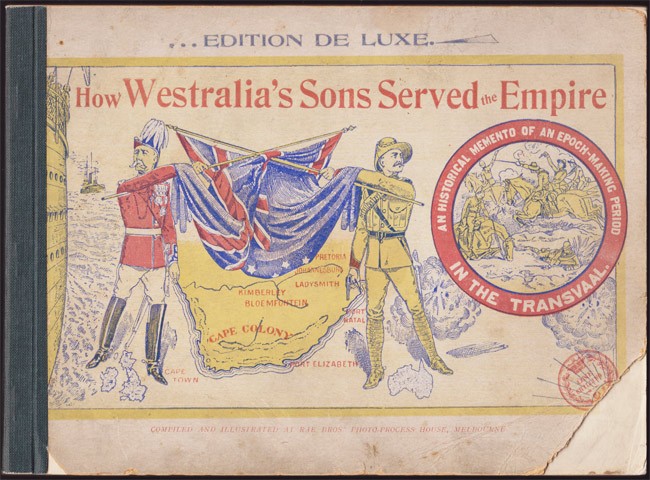 HOW WESTRALIA’S SONS SERVED THE EMPIRE

In South Africa. A.D. 1900. An Historical Memento of an Epoch-Making Period.

96 pages of photographs within coloured borders (group photos of the various contingents and views of the troops in South Africa) with commercial advertisements opposite, pictorial card covers with green cloth spine. The bottom of the front cover is missing, contents good.

Ferguson (J.A.) Bibliography of Australia, Volume 6.(1977), page 145, ‘Stiffened covers, title overprinted in blue and red against background of soldiers, flags, map of South Africa and medallion of battle. Pp. 5-15 deal with the First and Second Contingents and Imperial Bushmen’s Corps; remainder of text consists of photographs with advertisements facing.’ Only one copy listed.

Not in A South African Bibliography or the Supplement (volume 5) or Dornbusch (C.E.) Australian Military Bibliography (1963).

‘In the days when the population of Australia was little more than 3.5 million, a total of 16,175 volunteers were accepted to fight overseas. The services of as many again were turned down. Unsuccessful applicants in considerable numbers managed to find their own way to South Africa to join the ranks of the colonial forces being raised there.’ Wallace (R.L.) The Australians at the Boer War.