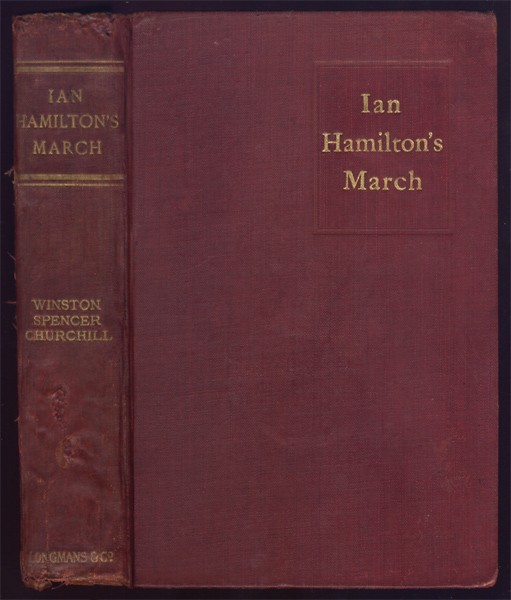 Together with extracts from the diary of Lieutenant T.H.C. Frankland with portrait, maps and plans.

Second Edition: 409 pages and 32 pages of publisher's catalogue at the end, frontispiece portrait, folding map at the end and 9 other maps and plans, red cloth gilt, a little worn along the edges of the back, a good copy.

The second edition was published in November 1900 one month after the first.

Mendelssohm (Sidney) South African Bibliography volume 1 page 339: This book is a continuation of those letters to the Morning Post newspaper on the South African War . . . published under the title 'London to Ladysmith via Pretoria'; the correspondence extending from March 31st to June 14, 1900, and including four letters which had not been previously published. The contents set forth the march of Ian Hamilton's column "on the flank of Lord Roberts' main army," from Bloemfontein to Pretoria, and it is stated that this force "encountered and overcame the brunt of the Boer resistance," and traversing 400 miles of the enemy's country, fought ten general actions and fourteen smaller affairs, capturing five towns. Mr. Churchill revisited Cape Town in April, and remarked on the altered behaviour of the "Dutch section" in consequence of the British successes.

He considered it was impossible to form a true impression of South Africans from the motley and biassed mixed multitude which crowded the city, but pays a generous tribute to Lord Milner, remarking "only at Government House did I find the Man of No illusions, the anxious but unwearied Proconsul, understanding the faults and virtues of both sides, measuring the balance of rights and wrongs, and determined more determined than ever..." The writer was in many sharp engagements, and nearly lost his life near Dewetsdorp with McNeill's Scouts.

In describing this action, it is mentioned that the general commanding did not care to bring his guns into such an advanced position owing to the danger of their capture, and it is significantly observed that "so long as the loss of the guns is considered as a national disaster instead of an ordinary incident of war, . . . officers will regard them rather as a source of anxiety than as powerful weapons." There is an interesting account of the life of the captured officers in Pretoria, and the volume contains a portrait of General Ian Hamilton, and a number of maps and plans illustrating his march.