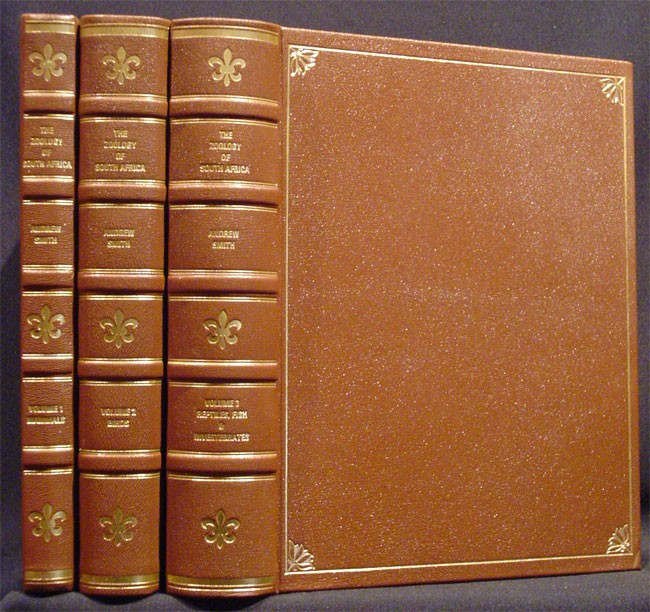 ILLUSTRATIONS OF THE ZOOLOGY OF SOUTH AFRICA

Set number 97 of the edition limited to 350 numbered sets.

Kirby (P.) Sir Andrew Smith\'s Zoology, A re-examination of the facts relating to its publications. Africana Notes & News, volume II, no. I. December 1944, pages 3-15. \'Andrew Smith from the moment of his arrival in South Africa in 1821, interested himself in the natural history of the sub-continent. He began immediately to collect and to preserve specimens, and to publish descriptions of them wherever possible, both in South Africa and overseas. He founded the South African Museum in June, 1825, and issued the first part of a descriptive catalogue of some of the contents in 1826. He published in \"The South African Commercial Advertiser\" a series of articles which were intended to give in outline the zoology of South Africa, and he was the leading spirit in the founding of the first scientific paper to be published in the country, \"The South African Quarterly Journal\", to which he contributed many valuable ornithological notes. He went on quite a number of scientific expeditions during his stay in South Africa, but it was his great expedition of 1834-1836 that supplied the bulk of the material for his classic work on South African Zoology.\' A prospectus was issued for the publication. \'The Work will appear in periodical parts, price ten shillings each; and it is estimated that it will be completed in about thirty-four parts. As it will be necessary that the plates be published promiscuously, they will be arranged in five divisions, viz., MAMMALIA, AVES, PISCES, REPTILIA and INVERTEBRATAE. The plates of each of these divisions will be numbered independently, and the letter-press descriptions left unpaginated, so that on the work being completed, they may be arranged either agreeably to the general classified order which will accompany the last number or according to the particular views of the purchaser.\'