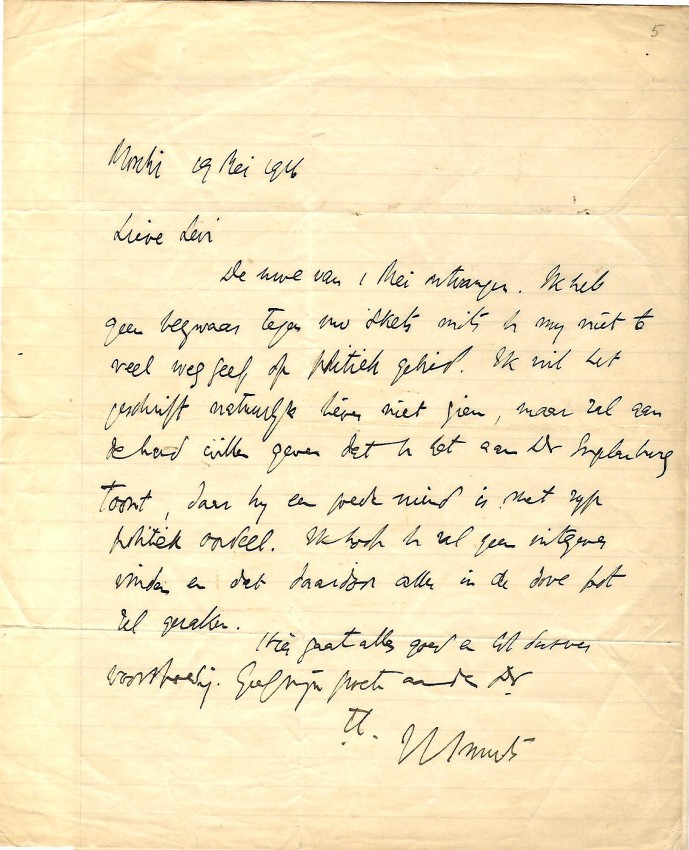 Nathan Levi was a journalist who, of special relevance, was Smuts’ first biographer. His book,  “Jan Smuts : Being a Character Sketch of Gen. the Hon. J. C. Smuts, K. C., M. L. A., Minister of Defence, Union of South Africa", was first published in 1917. He was a journalist, born in Holland in 1880 and educated there. He came to South Africa before the Anglo-Boer War and joined the editorial staff of Die Volkstem. After 1910 he became the Parliamentary reporter in Cape Town for this newspaper and became its assistant editor from 1926 – 1928. He died in 1942. From the nature of this archive, it would appear that Levi had developed a fairly close friendship with Smuts and that there was a healthy correspondence between them in both directions.

This archive comprises 33 autograph letters from Smuts to Levi and spans the period 4th. January 1913 to 20th. October 1934.  All are signed by Smuts. All but three of the letters are in his own hand – the other three are in the more legible hand of a scribe or secretary, but are still signed by Smuts.  All but one of the letters are in Afrikaans. One of the scribe-written letters is in English.  Smuts apologises for this thus "Excuse my dictating this letter to you in English as I find it difficult to write in bed, where I am confined because of a small operation for another of those tiresome carbuncles". The letters are written on papers of varying size and many are on letterheads including The Treasury - Pretoria, Volksraad - Kaapstad, Prime Minister's Office - Cape Town, Union Parliament - South Africa, Unie Parlement -  Suid-Afrika and Savoy Hotel - London. The letters vary in length from 1 to 4 pages - circa 63 written pages in total.  In most the content is substantial and of importance. A couple are shortish notes on a single page. A previous owner has numbered the letters in pencil on the front page of each letter from 1 to 37. No.'s 3, 10, 25 and 26 are missing, suggesting they have been either mislaid or removed.

Five of these letters are reproduced with translations in the 7 Volume work "Selections from the Smuts Papers" edited by Hancock and Van der Poel, a testament to their importance. Some of Levi.s letters to Smuts are also included in the above publication. Amongst other topics, frequently political, some personal, the subject matter varies from the Levi biography, Provincial elections, the South African Party, Hertzog’s intentions and the Nationalist Party, the 1929 General election, J.H. Hofmeyr and Smut’s  Rectorial lecture at St. Andrews in 1934.

Some short extracts (in translation):

19 May 1916 (re the Levi biography) "I have no objection to your sketch on condition that you do not give me away too much on the political side. Of course I would rather not see the manuscript, but would suggest that you show it to Dr Engelenburg as he is a good friend with ripe political judgement. I hope that you will not find a publisher, so that the whole thing will come to nothing."

29 Dec 1926 “We must wait for Hertzog to take the initiative. It is not at all clear what his plan is. I doubt if it is reunion ... Hertzog is caught in the snare of the Pact, and he does not know how to get out of it."

27 Feb 1927 "The results in the Transvaal are not very favourable. But the election was not fought there. It seems there was a feeble spirit on both sides and the Nats, with their superior organization, benefited from that. In the Cape and Natal where the fight was hard and the flag stirred up strong feeling, the results were more favourable."

17 Jan 1928 "The Creswell affair may bring things to a smash-up; otherwise I hear it is still Hertzog’s plan to hold an election in mid- 1929. The quarrel in the Labour party is becoming incurable..."

15 March 1928 "I am afraid the Nats are going to work up a new row about neutrality to keep the pot on the boil……. Hertzog is on very dangerous ground and the matter must be dealt with by the imperial conference and not by the Dominions separately"

The archive is generally in good to very good condition. There are the usual folds for posting. A few of the letters have some marginal fraying and one has an archival tape reinforcement to strengthen some fraying at the top edge. A couple have slight creasing.

I have supplied a random selection of images and would be happy to provide further information should it be required. Smuts's letters of this importance rarely appear on the market as most are in institutions and libraries. A unique opportunity to acquire a slice of this great and internationally renowned Statesman's output.