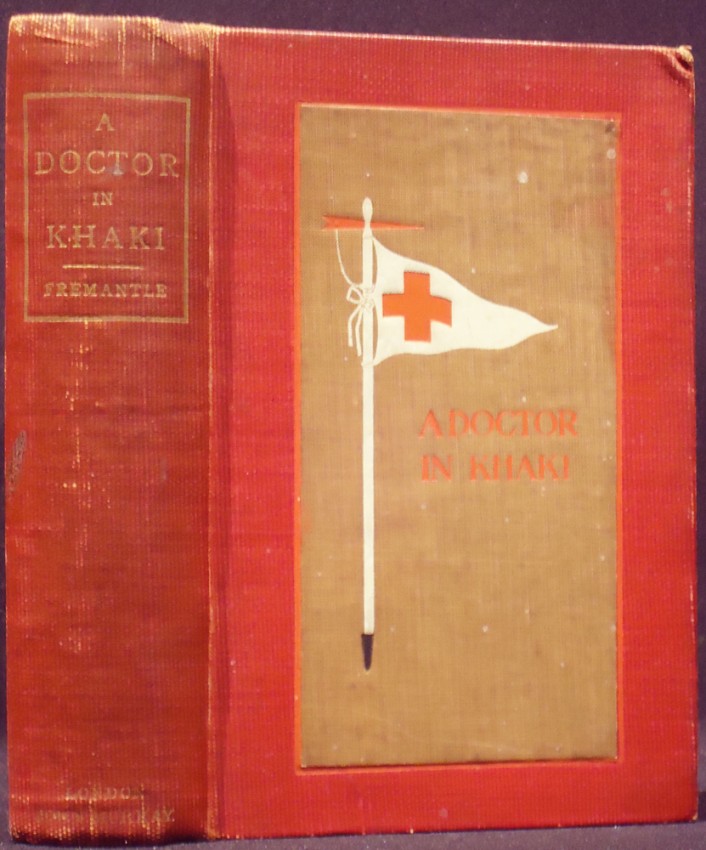 IMPRESSIONS OF A DOCTOR IN KHAKI

549 pages, frontispiece of ‘An operation in Khaki’, 34 photographic plates, 27 pen and ink sketches including 8 from Skiagrams (the early name for x-rays), 4 sketch maps, red cloth spine gilt and worn at the top and bottom, illustration of a hospital directing flag on the upper cover, uncut fore-edge and bottom edge, starting to work loose at the front hinge.

Mendelssohn (Sidney) South African Bibliography volume 1, pages 565-6. 'The author, who sailed for Africa in October 1899, states that no public announcement was made to the effect that civil surgeons were required for the war, the authorities trusting simply to chance applications. His fist post was at No. 1 General Hospital at Wynberg, and in a short time this hospital was very busy with an enormous crowds of wounded soldiers from Methuen's campaign. The writer seems to have been at variance with some of the superior officers of the Royal Army Medical Corps, and believed that an order which came for him to leave for England by the hospital ship Avoca had some connection with some articles criticising the bad nursing system which he had sent to Guy's Hospital Gazette and which were afterwards reproduced in the Daily Mail and other papers. He was reinstated in the service, and on his re-arrival in Cape Town proceeded to Bloemfontein and took part in the forward march with Lord Roberts'.

Hackett (R.G.) South African War Books, An Illustrated Bibliography (1994), page 89: Experiences of a civil surgeon employed in RAMC. During twelve months' army service the author worked at No 1 General Hospital at Wynberg, made two homeward voyages aboard hospital ships Avoca and Spartan tending casualties, and served in the Field Hospital and Bearer Company attached to the 19th brigade operating in the orange free State and Transvaal. Fremantle was summoned to give evidence before the Hospital Commission of Inquiry before leaving South Africa in October 1900.

EXPELLED FROM THE RAND

NEW ZEALANDERS AND THE BOER WAR

AUSTRALIA AT THE FRONT