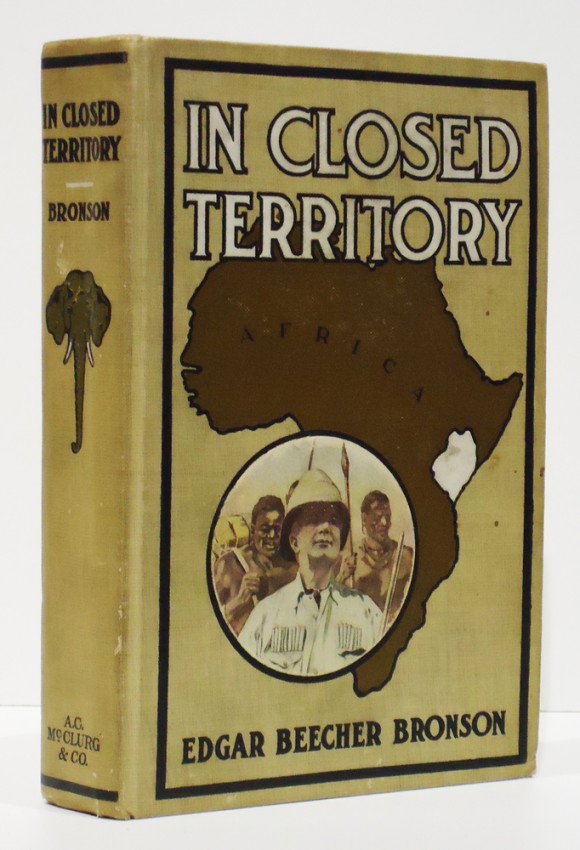 IN CLOSED TERRITORY (Signed by the author)

With nearly 100 illustrations from photographs by the author.

The inscription on the front free end paper reads; The author inscribes this volume for a well- loved kindred spirit and lover of a hot gun for Edwin Willard Deming NY 12 Nov '12

Czech (Dr. Kenneth) An Annotated Bibliography of African Big Game Hunting Books 1785 – 1999, page 36: The author received permission to hunt in the regions of British East Africa that had experienced native rebellion. After crossing the Mau Escarpment, he hunted west of the Guaso Nyiro, camping on the Ngari Kiti River. After bagging buffalo, kudu and eland, he proceeded to the Maggori River to hunt elephant. Bronson was joined on this safari by noted big game hunter John Alfred Jordon.

Edward Willard Deming 1860 - 1942 was a painter and sculptor. In 1887 Deming first visited and painted the Apaches and Pueblos of the Southwest. His active career of painting and illustrating took him repeatedly to the lands of the Blackfoot, Crow, and Sioux, as well as to Arizona and New Mexico. After the turn of the century, Deming devoted more time to sculpture but also began work on a series of romantic murals of Indian life, which were subsequently installed in the American Museum of Natural History and the Museum of the American Indian in New York. http://americanart.si.edu/collections/search/artist/?id=1208