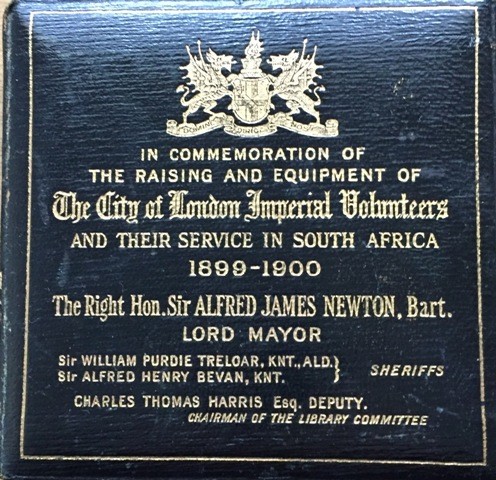 In Commemoration of the ... City of London Imperial Volunteers and their service in South Africa 1899-1900

Medal is 7.5 cm in diameter, the presentation box is 11,5 x 11,5 cm and secured by means of a spring catch mechanism. The medal rests in a dark green velvet frame which can be flipped to show both sides. The box is lined with silk cloth with text describing the illustrations, and attributed to George. J. Frampton, A.R.A.

The medal depicts Londonia in armour on a raised dais saluting departing CIV soldiers. On each side are oak branches intertwined with ribbons bearing the names of military engagements participated in by the unit, viz. (sic):- Jacobsdal, Paadeberg, Thabanchu, Britstown, Welkom, Zand River, Lindley, Doornkop, Florida, Diamond Hill, Pretoria, Frederickstadt, Bethlehem and Warmbaths. On the reverse side there is a small conical hill on which flies the Union flag below which is the CIV standard and the words: The City of London Volunteers / Raised and equipped for the war in / South Africa / by the citizens of London / Formed December 1899 / Returned to London /October 1900.

550 of these medals were minted in bronze and a very small number in silver.