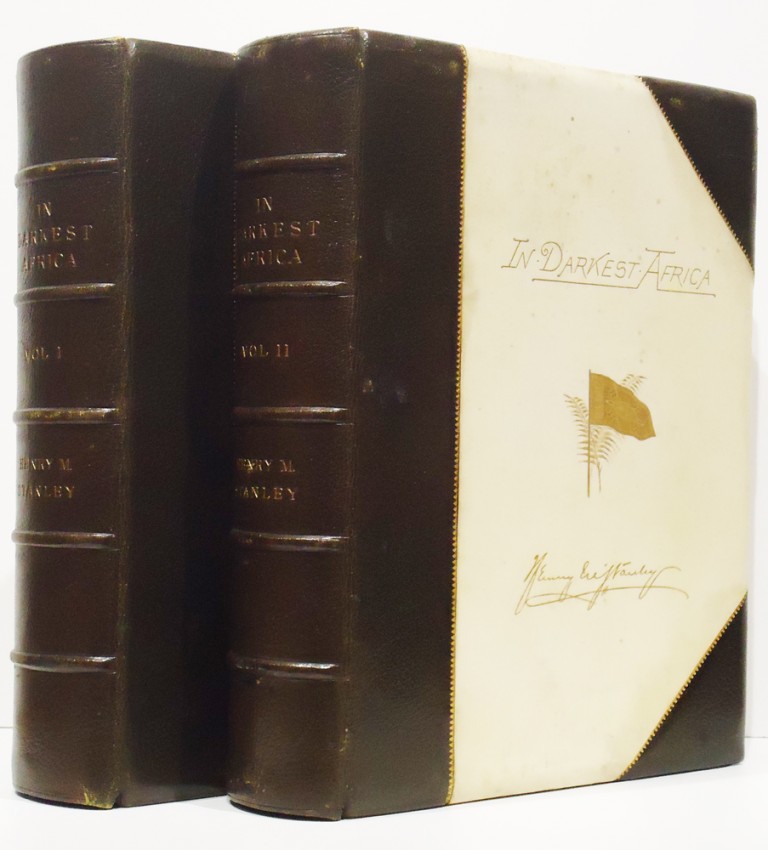 Or the Quest, Rescue and Retreat of Emin, Governor of Equatoria. With six etchings and one hundred and fifty woodcut illustrations and maps.

2 volumes, 529 + 472 pages, frontispiece portrait of Stanley in volume one, frontispiece in volume 2 of H. Stanley, Sir William Mackinnon and Sir F. de Winton (both are heliogravures by Lemercier & Co., Paris), title pages printed in red and black, 11 map - 3 folding maps two of which are mounted on linen, 40 plates and numerous text illustrations all printed in India paper, 6 full-page etchings signed in pencil by the artist G. Montbard (specially commissioned for this de luxe edition) with captioned tissue guards – there is some foxing in the margins of these plates, half black morocco with vellum boards, titled gilt and with vignettes and Stanley's signature in gilt on the upper covers, top edges gilt, contents which are printed on John Dickinson & Co. watermarked laid paper is crisp, silk place markers.

No 16 of the Demy Quarto Edition De Luxe limited to 250 copies signed by Henry M Stanley.

Bookplate of Alpheus Gardiner Williams on the front free endpaper of each volume.

'This was to be Stanley's last expedition to Africa. He was charged with rescuing Emin Pasha (Viceroy), who had been appointed a governor in southern Sudan by the British, and had been forced to retreat to the Lake Albert (now northern Uganda) by the uprising led by an Islamic holy man. In 1888 Stanley journeyed up the Congo and to the lake, reaching Emin, who refused to leave. Eventually persuaded by Stanley, they proceeded to the Indian Ocean by way of the Semliki River which was found to connect Lake Albert with Lake Edward.' From the facsimile reprint published by The Narrative Press, 2001.

THE HEART OF THE ANTARCTIC (Limited first edition signed Shackleton and all the members of the shore&hellip;

DISCOVERY OF LAKES RUDOLPH AND STEFANIE

An Asian Arcady. The Land and Peoples of Northern Siam ( SIGNED )

A Narrative of a Visit to the Mauritius and South Africa.