IN THE GRIP OF THE NYIKA

First edition:389 pages, numerous illustrations, 9 maps, coated paper, binding working loose at the front hinge opposite page 1, and at the back hinge but holding onto the netting, blue cloth with gilt vignette of a tribesman with a camel on upper cover, water stains on the upper cover, corners bumped, spine gilt, a good copy.

Lieutenant-Colonel John Henry Patterson, DSO (10 November 1867 – 18 June 1947), known as J. H. Patterson, was a British soldier, hunter, author and Christian Zionist, best known for his book The Man-Eaters of Tsavo (1907), which details his experiences while building a railway bridge over the Tsavo river in British East Africa (now Kenya) in 1898–99.The book has inspired three Hollywood films - Bwana Devil (1952), Killers of Kilimanjaro (1959) and The Ghost and the Darkness (1996) in which he was portrayed by Val Kilmer. He wrote In the Grip of the Nyika; Further Adventures in British East Africa London: Macmillan and Co., 1909 https://en.wikipedia.org/wiki/John_Henry_Patterson_(author)

From the preface: "In the following pages I have endeavoured to give a plain account of the trials and adventures which befell me on two recent expeditions through the nyika, or wilderness, in British East Africa. On the first trip there were three of us, and all returned safely to civilisation, although dangers were not wholly absent. On the second and longer expedition there were also three Europeans, but, alas! only two got back, the nyika having claimed the third; nor was the god of the wilds content with this sacrifice, for, in addition, he claimed several of my native followers. He laid his deadly grip on me as well, but I was wrested from him by the care and attention of my companion, to whose skilful nursing I feel I owe my life."

Life of Frederick Courtenay Selous (1918) - Inscribed by Author with Letter

A HUNTER'S WANDERINGS IN AFRICA

Adventures Beyond the Zambesi 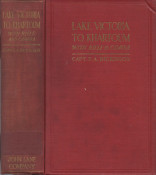