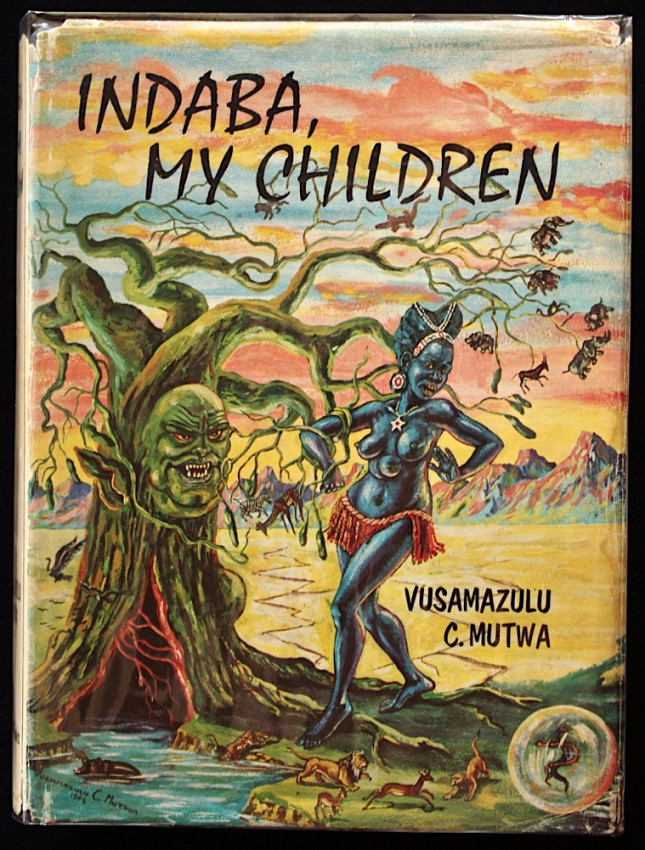 xix + 562pp. Illustrations in text. SIGNED and dated by the author on the title page.

'"You cannot fight an evil disease with sweet medicine" is a saying popular among witchdoctors. And, says the witchdoctor author of this book, one of the most remarkable ever to come out of Africa, you cannot hope to cure a putrid malady like inter-racial misunderstanding by mincing words.

In these pages, Vusamazulu Credo Mutwa, Hereditary High Witchdoctor to the Zulu nation; Guardian of Tribal History, and Guardian of Tribal Religion - "The Chosen One" - tears aside the veil of secrecy that for centuries has concealed the truth about African tribal history and of their customs and religious beliefs. In doing so he has broken his sacred tribal oath of secrecy and drawn upon himself the stigma of traitor. He believes, however, that it is only by revealing the truth that has, in terms of tribal law, been deliberately distorted from time immemorial to deceive and confuse the enemy - be they White of Black - that there can be any hope of bridging the racial gulf and putting an end to the bloodshed and suffering that characterises the history of Africa. Kenya's Mau Mau uprising, Angola's rebellion, the massacres in the Congo, riots and killings in South Africa - "all soon to be written in blood permanently on the highway of human history" - were started by one thing, the total lack of understanding between Black and White; the utter failure of one race of human beings to understand what goes on in the minds of the other race, says Mutwa.

In telling the story of African tribal life since the time of the Phoenicians he recounts fascinating fables and legends handed down from one generation of witchdoctors to another in some of which are to be found possible solutions to several of the most baffling of African enigmas - the origin of the Zimbabwe ruins, the White Lady of the Brandberg, the Zulu version of how Piet Retief and his followers came to be murdered by Dingaan; and others.

In the view of some educationists Mutwa's book could one day mean to Africans what the Koran means to Moslems. One of the most striking features is the way the book is written, revealing Mutwa's remarkable command of the English language. From chapter to chapter and sometimes from paragraph to paragraph he changes his style of writing to suit his subject. At times it is the classic English of Eliot or Forster; at others the strange flowing idiom of the Bantu. By the use of fact and fable Mutwa takes the African mind and lays it bare, sparing no feelings. It is not a book, he says, for people who prefer hypocrisy to fact . . . the love life of many African tribes is openly and frankly discussed; as well as their religious beliefs, their crafts and their strange and varied reactions to civilisation today.

"Indaba, My Children" has already been hailed by one newspaper as an epic that could go a long way towards filling in the great gaps in African history.'