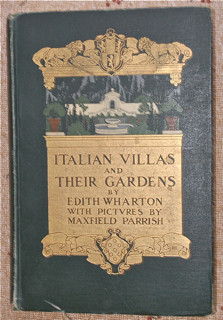 Italian Villas and Their Gardens

New York: Century, 1907. Second edition (xi, 270, index).  Illustrated with pictures by Maxfiel Whartond Parrish-- 52 plates with tissue guards on stiff card,  26 of which are coloured drawings by Parrish. From the collection of  E. Avery McCarthy, travel writer for Saturday Night, whose florid autograph (Christmas 1909) occupies nearly half an ffep, bookplate at rear. Small folio (28 cm x 18 cm) in decorative green cloth, gilt decoration and titles, t.e.g. Top and bottom of spine abraded, corners worn, binding a bit loose. Something of a villa tour, ranging from Florence down through Sienna and to Rome, thence into Genoa, Lombardy, and Venice, and in each place Parrish’s pictures elicit an order and balance suffused in a golden glow (The b&w photos aren’t bad either).  As Wharton says in the introduction, Italian gardens were meant more to be lived in than to be admired for their floricultural compositions (the gardens at Giverny)-- and, anyhow, once Spring had passed by, it became far too hot and dry to cultivate great drifts of flowers. So the garden-- its ponds, shady walks, cool marble structures, and evergreens-- is adapted ‘to the architectural lines of the house it adjoined’, to the needs ‘of the inmates of the house’, and to the demands of the immediate environs (often a hillside).  The second of Wharton’s works on architectural design, the first being The Decoration of Houses (1897) which in rooting out oppressive, draped, curtained, and over-stuffed interiors of late Victorian times did for the inside what Villas and Gardens set out to do for the outside.