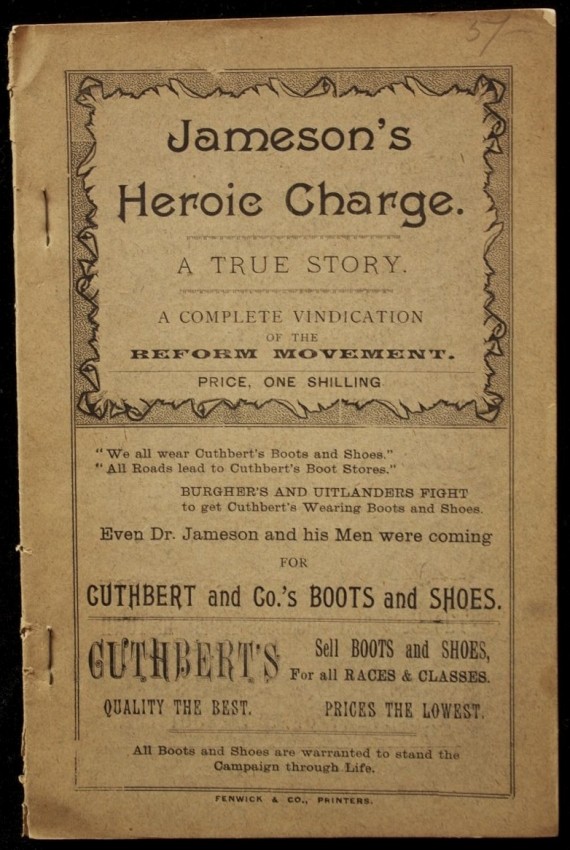 A Complete Vindication of the Reform Movement.

This booklet was published a month after Dr. Leander Starr Jameson's infamous raid into the Transvaal Republic and is a very rare example of early Johannesburg printing.39pp. With adverts at rear and an opportunistic, yet very humorous, advert on the front cover. Stapled binding. Book is in near fine condition considering the age. Pages white with no markings.

'A brochure written as a counterblast to the pamphlet "The Revolution-and After." There is a summary of the charges against the Boers and their government, and it is stated that, "when the National Union gave up all hope, the Capitalists stepped in." The allegations in "The Revolution-and After" are denied in violent language, and it is asserted that a false letter, and an equally false telegram, were sent to Jameson, and that the Reform Committee were dumbfounded on receipt of the news that he had crossed the border. The author of Part II. purports "to give a true and impartial history of Jameson's ride, as furnished by one who was in it from start to finish," and full details are given of the Raid and the subsequent surrender. The is a government official list of the killed and wounded in Jameson's column; also the names of the Reform Committee, and the amounts subscribed by different firms and persons under the name of the Relief Fund, a list of "The Charter(ed) Prisoners," and the official account of the Boers killed and wounded.' See Mendelssohn, Vol.I. page 768.