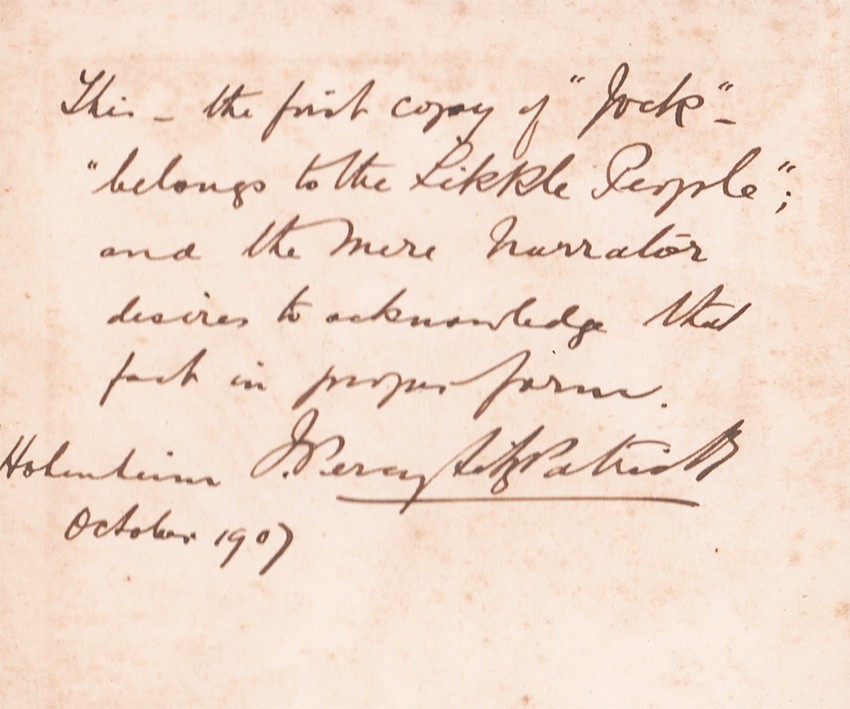 First edition, First impression. 475 pages, colour frontispiece, plates and marginal illustrations, dark green cloth with gilt titling and gilt vignette of Jock on the upper cover, light foxing throughout mainly in the text and on the page edges, with the drawings of a dung beetle pushing his load with his front legs rather than his back legs on pages 65, 337 and 457 and Snowball the horse being dragged out of the river on page 316 - these drawings were changed in later impressions. The spine is starting to fray at the top and the bottom, the bottom edge of the upper cover and the corners are slightly scuffed, housed in a specially made oatmeal textured cloth solander box with a dark green title label gilt on the spine, a very good copy of the first edition.

Inscription on the front paste-down end paper reads: This is the first copy of “Jock”- “ belongs to the Likkle People” and the mere narrator desires to acknowledge that fact in proper form. J Percy Fitzpatrick Hohenheim October 1907

The dedications page reads: It was the youngest of the High Authorities who gravely informed the Inquiring Stranger that “Jock belongs to the Likkle People!” That being so, it is clearly the duty, no less less that the privilege, of the mere Narrator to dedicate the Story of Jock to those Keenest and Kindest critics, Best of Friends, and Most Delightful of Comrades The Likkle People.

Rudyard Kipling, an intimate friend, used to take part in these story-telling evenings and he it was who persuaded Fitzpatrick to put the stories together in book form. Having done this, Fitzpatrick searched for a suitable artist to illustrate the book and eventually came across Edmund Caldwell in London and brought him to South Africa to visit the Bushveld and make the drawings on the spot.

The book, which appeared in 1907 for the first time, was an immediate and overwhelming success, being reprinted four times in that year.http://www.krugerpark.co.za/sir-percy-fitzpatrick-kruger-national-park.html

Extracted from his South African Memories pages 24 -25: Of course to those who have read Jock of the Bushveld he needs no introduction. Jock and Jess and Jim will always live in the memories of the Little People whom he was addressing and whom in every generation of young South Africans he will continue to address. The Little People have always loved Jock and his companions because they know what was being told to them was true and that it was all about their own wonderful country. Sir Percy's vivid and vital personality appeared in everything he touched or said or wrote.

From the same book: Chapter xviii - Jock of the Bushveld and those who knew him pages 273- 278 (originally published in The State in 1909). It was no use saying that the work of the Convention was quite enough and there was no time for anything else or that one was already doing ones' best to forward the cause of the Union! The editors of The State with smiling firmness insisted that the writer of Jock owed it to the Little People of South Africa, from whom he has received many evidences of friendship, to show gratitude by writing something more about Jock... No - there will never be a sequel. A good deal was cut out and more was never told, but apart from that, the story of Jock is as simply true as the writer's memory could make it.