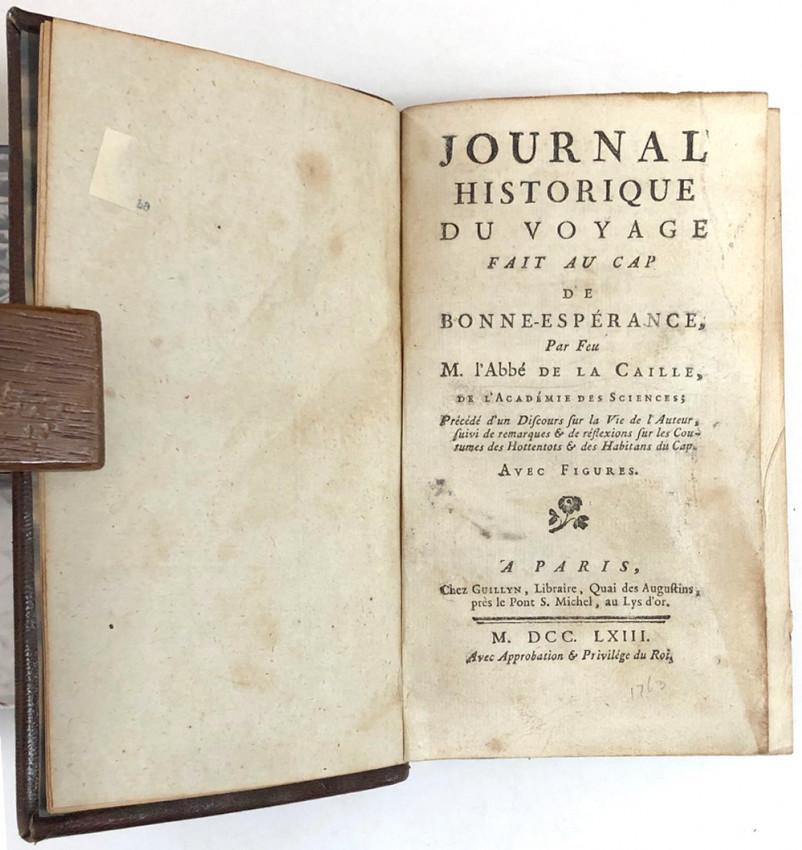 Chez Guillyn, Paris. 1763. 12mo. xxxvi prelims plus 384 pages. With a fine folding map of the Cape, 20x14cm., tipped in on an extra leaf between pages 356 and 357. and 3 vignette engravings at the base of 3 pages. Bound in full contemporary brown calf with small motif impressed in the centre of both front and rear boards, five bands on the spine and the gilt lettered title on a maroon leather label in the second compartment. Marbled endpapers (possibly later). A very clean tight copy without foxing. SABIB Vol. 3, Page 38.

Diary of a Voyage to the Cape of Good Hope by the late Abbe De La Caille, of the Academy of Science. Preceded by a biography of the author, followed by remarks and notes on the customs of the Hottentots and Inhabitants of the Cape. The author, an eminent French mathematician and astronomer, was born at Rumigni, a small town in the diocese of Rheims, on the 15th of March 1713. He received a good education, but was early attracted to the study of astronomy, and details of his studies and achievements will be found in the biography which forms the first part of the volume. He arrived at the Cape on March 30, 1751, and was soon engaged in a study of the parallax of the moon, an account of his researches and discoveries appearing in the “Memoires de l'Academie Royale des Sciences “ for 1751, which was published at Paris in 1755. In the journal of his voyage he gives descriptions of Rio Janeiro, the Cape, Bourbon, and Ascension. With reference to his account of the customs of the Hottentots and other inhabitants of the Cape, and his criticisms of Kolbe's narrative, Theal remarks (“History of South Africa, 1691-1795”) that “Their chief worth, historically considered, is the exposure given in them to some of Kolbe's errors, though in correcting his description of the Hottentots, De La Caille really made almost as great blunders himself. From this date, at least, Kolbe ceased to be considered a standard author, which was an enormous gain to students of Cape history.” De La Caille left Bourbon for France by the Achilles on February 27, 1754, and arrived in Paris on June 28th. He died on March 21, 1762, a year before the publication of this work.'  - Mendelssohn, Vol. 1, Page 434.