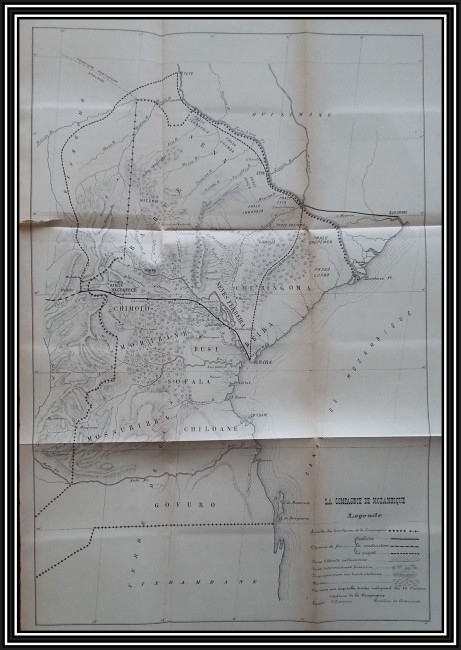 Stunning work about the colonisation of Southeast and South Africa and The Mozambique Company, a public company for mining and colonial enterprises in Mozambique and their predecessor entities.

"The Mozambique Company. Its concession, its administration, its results (1898)", by P. de Bonnefont de Varinay, former Director of the Railways and the Port de la Reunion, Knight of the Legion of Honor & ex-General Inspector of the Mozambique Company. With many historical, financial, political, economic and military details about the colonisation of the territory of Mozambique, Southeast and Southern Africa. With two folding maps of Southern Africa - the first one (32,5 x 49,5 cm) shows the Territory of The Mozambique Company, the second one (46,5 x 33,5 cm) shows the ensemble and channels of communication (Railways, Roads of Coaches and Maritimes lines).

I. Origin of the Company

- Political circumstances which led its transformation

II. Possible value of the concession

3. The Port of Beira

III. Ways and means of the Company

- Faculties and Privileges, prescribed, or granted to the company, or left at his disposal by its charter

- Administrative Organization in Europe and Africa on the 1st January 1898

3. Beira and its Port

VIII. State of the opinion of the Company's executive powers

1. Population figure on the Company's territories

3. Beira and its Port

During the 19th century other European powers, particularly the British (British South Africa Company or BSAC) and the French (Madagascar), became increasingly involved in the trade and politics of the region around the Portuguese East African territories. By the early 20th century the Portuguese had shifted the administration of much of Mozambique to large private companies - the Portuguese government decided to entrust the operation of the major part of the country for fifty years to three private companies which were given the powers of a State on a territory and the monopoly of its exploitation in exchange for a fee paid to Portugal. These 3 companies were: The Mozambique Company, the Zambezia Company and the Niassa Company, controlled and financed mostly by the British, which established railroad lines to their neighbouring colonies (South Africa and Rhodesia). Although slavery had been legally abolished in Mozambique, at the end of the 19th century the Chartered companies enacted a forced labor policy and supplied cheap – often forced – African labour to the mines and plantations of the nearby British colonies and South Africa. The chartered companies built roads and ports to bring their goods to market including a railroad linking present day Zimbabwe with the Mozambican port of Beira. The balance sheet of these companies was nevertheless disappointing. The defined policies aimed at the enrichment of the portuguese and European settlers metropolis, have tended to neglect the development of social infrastructure (clinics, schools) and the equipment for the country. An inter-state agreement was even concluded between Portugal and the Union of South Africa, in order to enable the recruitment of migrant workers Mozambicans in the mines in the Transvaal.

The Mozambique Company (Portuguese: Companhia de Moçambique) was a royal company operating in Portuguese Mozambique that had the concession of the lands in the Portuguese colony corresponding to the present provinces of Manica and Sofala in central Mozambique (135,000 km2). Its capital was mainly French, but also Portuguese, British and South African.The company was established the 11 February 1891 with a capital stock of about 5 million dollars obtained from financiers from Germany, the United Kingdom and South Africa. Isaacman and Isaacman report that the firm was capitalised at 40,000 pounds (not $5 M), and that British and French capital quickly predominated. The concession was granted for a period of 50 years, during which the company could not only exploit the resources and existing manpower (partly through the chibalo system of forced labour) but also grant subconcessions. The company was granted the exclusive right to collect taxes, but was itself granted a 25-year tax exemption. In return the Portuguese state would receive 7.5% of the company's profits and 10% of the sold shares. The company was also required to settle 1,000 Portuguese families and provide education and public administration in its territory.In practice, the company made only partial use of the prerogatives with which it had been bestowed; but this was balanced by the fact that it also met very few of its obligations. Having only limited capital, the company did little to develop the area, deriving most of its income from its ability to tax and its power to use conscripted labour on its plantations and for lease to adjacent estates. Resistance to the forced labour regime was a major cause of rebellions against the company which occurred in 1902 and 1917. Despite the company's obligation under its charter to provide forces to maintain law and order, it was unable to meet these crises, and on both occasions Portugal had to mount expensive interventions.The Mozambique Company had its headquarters in Beira, where it controlled the public administration and the post offices. The company also founded a private bank, the Banco da Beira, which issued currency in pounds.Because of its bad performance and because of the shift, under the Salazar regime, towards Portuguese control and away from international control of the economy, the company's concession was not renewed when it ran out in 1942. The Governor of Manica and Sofala commented: ''They did nothing to develop the potential wealth of this entire region, preferring to plunder it and alienate the natives.''