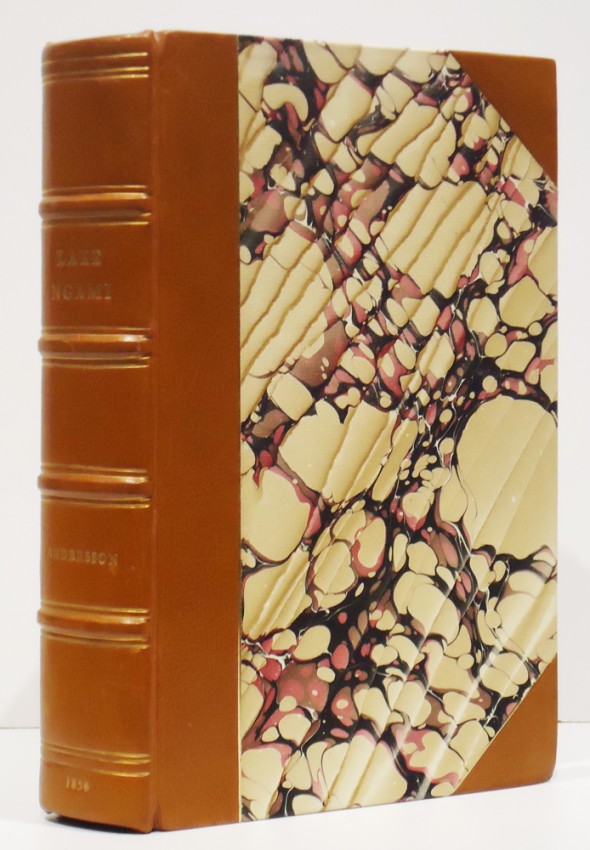 Or Explorations and Discoveries, during four years' wanderings in the wilds of South Western Africa.

With a map and numerous illustrations.

Mendelssohn (Sydney) South African Bibliography, volume 1, page 41: 'The narratives describe two expeditions, one in which the author was accompanied by Mr Francis Galton which extended to Nangoro's Werft in the Ovampo country and the other when he travelled by himself to Lake Ngami. The courage and endurance of the explorers were remarkable, and their sufferings from the dearth of water were at times very terrible. Few, if any books give so full and complete an account of Namaqualand, Damaraland, and the Ovampo country and the description of the fauna of these countries is absolutely unequalled. Galton sailed for England in early 1852 and Andersson commenced his journey to Lake Ngami in the early part of 1853, reaching the lake about the middle of the same year. He gives descriptive accounts of the ostrich, giraffe, rhinoceros and other animals and a full description of the native races.'

This is Andersson's major work and great care was taken over its publication. The tinted lithographs were executed by Joseph Wolfe and printed by Hanhart. Its success was somewhat overshadowed by Livingstone who had returned from Africa towards the end of 1856 and by the publication of his Missionary Travels the following year.

It nevertheless ran to two editions in 1856 and an American edition with wood engravings instead of the lithographs the following year.