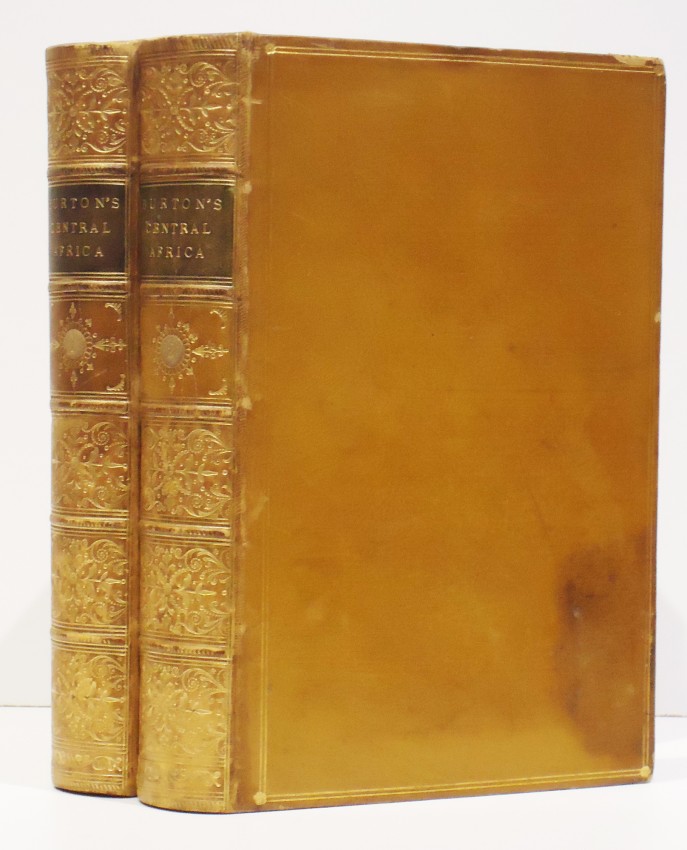 A Picture of Exploration

2 volumes: I. xvi, (iv) – 412, II. vi, (iv) – 468 pages, 12 chromoxylographs – one as a frontispiece in each volume, 22 woodcuts, folding map in volume II, full polished calf titled and richly gilt decorated on the spines in panels, marbled edges endpapers, some light foxing on the backs of the chromoxylographs, otherwise the contents are crisp and bright, a very good copy.

Penzer (N.M.) An Annotated Bibliography of Sir Richard Francis Burton, London 1923, page 65-67, 'The first issue was rather a failure, very few copies being sold…Second issue, the remainder issue proved unexpectedly popular…it contains the whole of the matter, but the map is generally in volume II.'

Abbey (J.R.) TRAVEL IN AQUATINT AND LITHOGRAPHY, 1770-1860, Dawsons of Pall Mall, reprinted 1972, No. 275, 'In the list illustrations the plates are described as 'Chromoxylographs' This is a simply grandiose name for multiple wood-engravings as the means of colouring.'

In the preface Burton addresses the ill feeling between himself and John Hanning Speke over the latter's claim to have been the discoverer of the source of the Nile. 'I have spoken out my feelings concerning Captain Speke, my companion in the Expedition which forms the subject of these pages. The history of our companionship is simply this: - As he had suffered with me in purse and person at Berberah, in 1855, I thought it but just to offer him the opportunity of renewing an attempt to penetrate into Africa. I had no other reasons. I could not expect much from his assistance; he was not a linguist - French and Arabic being equally unknown to him - nor a man of science,  nor an accurate astronomical observer. The Court of Directors officially refused him leave of absence; I obtained it for him by an application to the local authorities at Bombay. During the exploration he acted in a subordinate capacity; and as may be imagined amongst a party of Arabs, Baloch, and Africans, whose languages he ignored, he was unfit for any other but a subordinate capacity. Can I then feel otherwise than indignant, when I find that, after preceding me from Aden to England, with the spontaneous offer, on his part, of not appearing before the Society that originated the Expedition until my return, he had lost no time in taking measures to secure for himself the right of working the field which I had opened, and that from that day he has placed himself en evidence as the primum mobile of an Expedition, in which he signed himself "surveyor," - cujus pars minima fuit?' 'The dispute between Speke and Burton which was to have culminated in the debate which was arranged to take place between the two men on 16th September 1864 at Bath but which never took place owing to Speke's accidental death the day before.' (Page 189, 'Speke', by Alexander Maitland.)