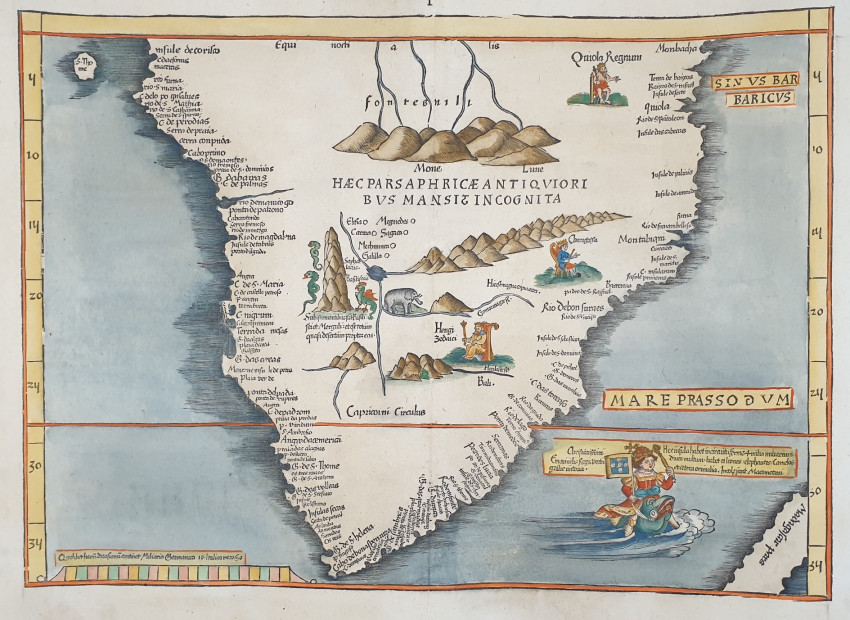 Original edition of 1541 of one of the earliest map of South Africa. Big size

One of the earliest map of southern Africa, the edition of 1541 of the Fries reduction of the map by Martin Waldseemuller, a German priest and cartographer who contributed 16th century editions of Ptolemaic Geographia.

The detailed coastal information seems to have been derived by the surveys undertaken during the first two long voyages of Vasco de Gama.

The map extends north to the equator and includes part of Madagascar. The Mountains of the Moon (Mone Lune) are shown at the top with a notation that they are the Source of the Nile River.

The Latin text near the equator states that "this part of ancient Africa remains unknown".

The King of Portugal is depicted riding a sea monster while holding the flag of Portugal.

In the top right is a depiction of Prester John, a mythical, benign Christian ruler who was thought to live in one of the three "Indias"; when the European explorers couldn't find him in the other two, they conclude he must live in "Ãethiopia".

This edition was printed by Gaspar Treschel and edited by Michael Villanovus (known as Servetus). Servetus was charged with heresy by John Calvin in 1553, in part due to the text in this atlas. The courts found him guilty and sentenced him to burning at the stake, a top a pyre of his own books, including this atlas.

The map is magistrally coloured.

Conditions: Good conditions. Occasional foxing. Little worming that has been restored in the central folding