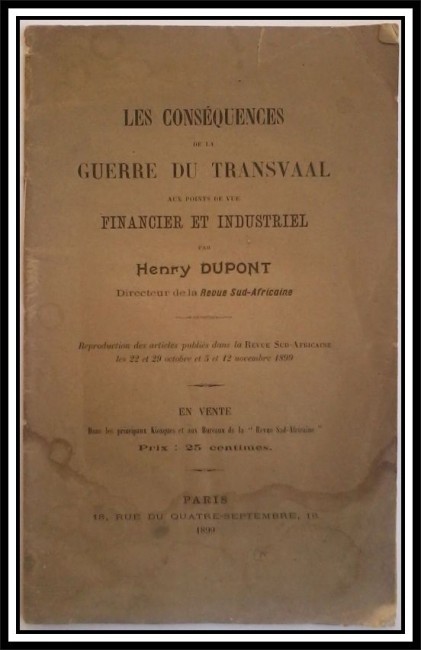 SOUGHT AFTER first editon of the important work "The consequences of the Transvaal War (The First Boer War) in points of Financial and Industrial view" by Henry Dupont.

SOUGHT AFTER first editon of the important work "The consequences of the Transvaal War (The First Boer War) in points of Financial and Industrial view" by Henry Dupont, director of the magazine ''South Africa''. This precious book is collection of articles published in the Journal South Africa on 22 and 29 October and 5 and November 12, 1899.

During a decade of thousands of years, the region of the future Transvaal was inhabited by the ancestors of The Khoikhoi. From the fourth century, the region was invaded by the Bantu peoples who came from central Africa who were going to establish or continue their road up to the shores of the Indian ocean in the future Transkei and Kwa Zulu-Natal. At the beginning of the nineteenth century, the region is as well the dwelling place of a few tens of thousands of people divided into tribes, villages such Dithakong and chiefdoms. In 1817, the region was invaded by the troops of the Ndebele leader Mzilikazi, pursued himself by hordes of warriors of king Shaka. The peoples of the region, forced to take party, are then the subject of raids, deportations and massacres of the part of the one and the other of the warring parties. Finally, the famine that resulted from these assaults completed to develop the economies and political systems premises in disarray. The villages are abandoned by their inhabitants who emigrate to other regions to the east and north, far from their places of traditional life. It is the "Le Mfecane" or great upheaval. Those who remain are weakened and at the mercy of the invaders or of local despots. The area began to make the object at the same time of interest to explorers Boers or British who came to the Cape Colony. From 1827 to 1836, the south-west of the future Transvaal region is dominated by the troops of Mzilikazi. In 1829, the missionary Robert Moffat is admitted to the court of Mzilikazi then that the first commercial relationships are forged between the white explorers and the local tribes. From 1830, the explorations are intensifying. In 1835, several thousands of boers leave the Cape Colony in search of a promised land or build an independent republic of any colonial power. It is the Great Trek.

From Capetown to Ladysmith. An unfinished record of the South African War (1969) 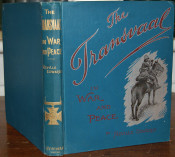 The Transvaal in War and Peace