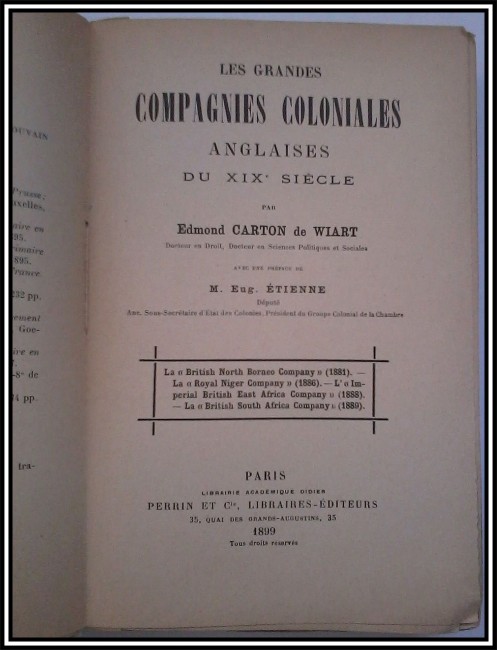 Stunning work about the great English colonial companies from the 19th century with many historical, political, economic and military details about the colonisation of Africa and Asia, by Edmond Carton de Wiart, Doctor of Law & Doctor of political and social sciences. With a Preface by Mr. Eugene Etienne, former member of The Secretary of State for the Colonies & President of the colonial Group of the House. Extremely rare copy of this precious work, hard to find even in National and University Libraries.

This precious book is composed of 5 chapters:

- Preparatory financial operations to the establishment of the BSAC

- Request for a charter to the Government

- Founders of the BSAC

- Special requirements of the charter

- Own character of the BSAC

3) The administration of the BSAC

- Situation in the territories of the BSAC

- Occupation of the country

- Changes to the charter proposed by Mr. Chamberlain

# The British South Africa Company (BSAC or BSACo) was established following the amalgamation of Cecil Rhodes' Central Search Association and the London-based Exploring Company Ltd which had originally competed to exploit the expected mineral wealth of Mashonaland but united because of common economic interests and to secure British government backing. The company received a Royal Charter in 1889 modelled on that of the British East India Company. Its first directors included the Duke of Abercorn, Rhodes himself and the South African financier Alfred Beit. Rhodes hoped BSAC would promote colonisation and economic exploitation across much of south-central Africa, as part of the "Scramble for Africa". However, his main focus was south of the Zambezi, in Mashonaland and the coastal areas to its east, from which he believed the Portuguese could be removed by payment or force, and in the Transvaal, which he hoped would return to British control. It has been suggested that Rhodes' ambition was to create a zone of British commercial and political influence from "Cape to Cairo", but this was far beyond the resources of any commercial company to achieve and would not have given investors the financial returns they expected. BSAC was created in the expectation that the gold fields of Mashonaland would provide funds for the development of other areas of Central Africa, including the mineral wealth of Katanga. When the expected wealth of Mashonaland did not materialise and Katanga was acquired by the Congo Free State, the company had little money left after building railways for significant development, particularly in areas north of the Zambezi. BSAC regarded its lands north of the Zambezi as territory to be held as cheaply as possible for future, rather than immediate, exploitation. The charter was initially granted for 25 years, and it was extended for a 10-year period in 1915. Company rule ended in Southern Rhodesia in 1923, when the white settlers were granted responsible government, and in Northern Rhodesia in 1924, when the British Colonial Office assumed control.

# The Imperial British East Africa Company (IBEAC) was the administrator of British East Africa, which was the forerunner of the East Africa Protectorate, later Kenya. The IBEAC was a commercial association founded to develop African trade in the areas controlled by the British colonial power. Created after the Berlin Treaty of 1885, it was led by William Mackinnon and built upon his company's trading activities in the region, with the encouragement of the British government through the granting of an imperial charter - although it remained unclear what this actually meant. It granted immunity of prosecution to British subjects whilst allowing them the right to raise taxes, impose custom duties, administer justice, make treaties and otherwise act as the government of the area. Mombasa and its harbour were central to its operations, with an administrative office about 50 miles (80 km) south in Shimoni. The company was incorporated in London on 18 April 1888, and granted a royal charter by Queen Victoria on 6 September 1888. The IBEAC oversaw an area of about 246,800 square miles (639,000 km2) along the eastern coast of Africa, its centre being at about 39° East longitude and 0° latitude, and from 1890 also administered Uganda. The administration of British East Africa was transferred to the Foreign Office on 1 July 1895, and in 1896 so was control of Uganda.

# The Royal Niger Company was a mercantile company chartered by the British government in the nineteenth century. It was formed in 1879 as the United African Company and renamed to National African Company in 1881 and to Royal Niger Company in 1886. The company existed for a comparatively short time (1879–1900) but was instrumental in the formation of Colonial Nigeria, as it enabled the British Empire to establish control over the lower Niger against the German competition led by Bismarck during the 1890s. In 1900, the company-controlled territories became the Southern Nigeria Protectorate, which was in turn united with the Northern Nigeria Protectorate to form the Colony and Protectorate of Nigeria in 1914 (which eventually gained independence within the same borders as the Federal Republic of Nigeria in 1960).

# The North Borneo Chartered Company or British North Borneo Company was a chartered company assigned to administer North Borneo (today's Sabah in Malaysia) in August 1881. The company also administered the island of Labuan for a temporary period in 1890 before it became part of the Straits Settlements. North Borneo became a protectorate of the British Empire with internal affairs administered by the company until 1946 when it became the Crown Colony of British North Borneo. The main motto was Pergo et Perago (Latin), which means "I undertake and I achieve". The first chairman of the company was Alfred Dent. In 1882, the North Borneo Chartered Company established a settlement on Pulau Gaya, one year after the Chartered Company was given the mandate to rule Sabah. However, in 1897, this settlement was burnt to the ground during the raid led by Mat Salleh, a Sabah tribal Chief and it was never re-established. This company is also known as 'Syarikat Borneo Utara British' and was criticised by the locals for the taxes it collected. Establishing law and order as well as recruiting Sikh policeman from North India was one of the early roles the NBCC initiated, as well as expanding trade, a system of government, courts to enforce laws and punishment and building both a railway line from Jesselton to Tenom and encouraging the harvesting and barter trade of both local agriculture produce and crops, as well as establishment of plantations.