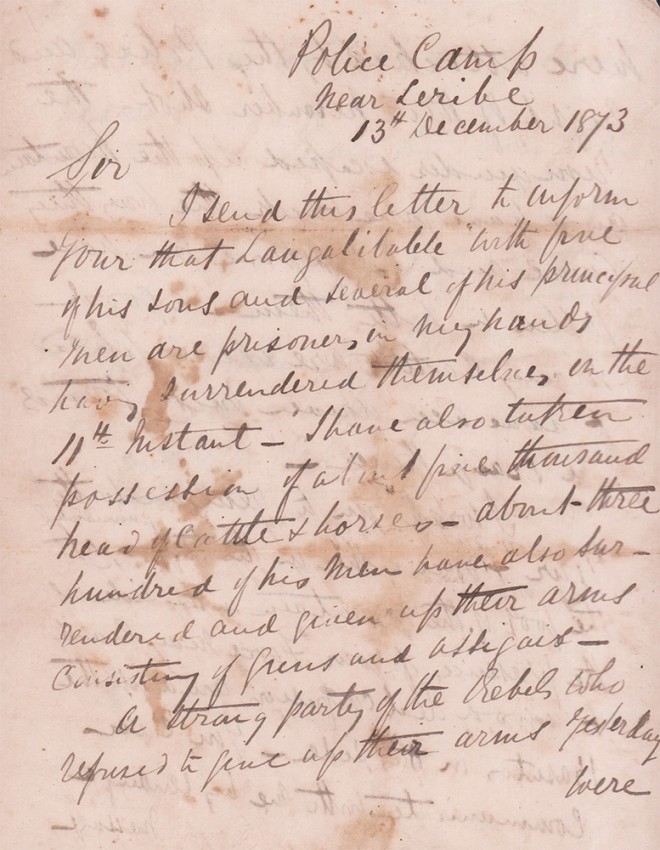 LETTERS FROM THE LANGALIBELELE REBELLION OF 1873

The first one dated 13 December 1873 written at the Police Camp near Leribe addressed to the Officer commanding the Natal Forces in pursuit of the rebels. It is written on 3 sides of an a5 note in black ink which has water stains on it.

It is signed by Griffith, the prisoners agent, and includes the following information: Langalibelele with 5 of his sons and several of his princes are prisoners in my hands having surrendered themselves on the 11th instant. I have also taken possession of all their firearms and heads of cattle. About 300 of this men have also surrendered and given up their arms consisting of guns and assegais.

The second one dated 15 December 1873. on an a5 note written only on one side in pencil and addressed to Captain Allison Commanding Natal Patrol from Leribe: The letter reads: My dear Allison, I send you a tourist bag found upon one of the rebels inside it you will find a pocket book belonging to Maj. Durnford and an account against Captain Barter, also a cheque book belonging I suppose to one of the party signed Yours truly Griffith

Langalibelele rebellion. While inhabiting the area near present day Estcourt in the Drakensberg foothills, Langalibalele - a hereditary chief of the Hlubi - was summonsed to Pietermaritzburg for failure to register firearms. The Hlubi had received these firearms as a form of payment from the owners of diamond mines.

After refusing to go to Pietermartizburg, a force was sent against Langalibalele. He subsequently fled the colony, but three of the colonial troops were killed in a clash on the Bushman's River Pass. Deemed to be in rebellion, the Hlubi chief was captured and sent to Pietermaritzburg where he was put on trial by a kangaroo court which consisted of substantial procedural irregularities.

Lieutenant-Governor Sir Benjamin Pine punished the Hlubi by breaking up their location, confiscating their cattle, and imprisoning Langalibalele on Robben Island. Langalibalele was therefore one of the first Black activists to be banished to Robben Island, nearly a century before Nelson Mandela and numerous other activists were imprisoned there. https://www.sahistory.org.za/dated-event/hlubi-chief-langalibalele-becomes-one-first-black-activists-be-tried-and-banished-robben

There is a very detailed account of the Rebellion published in the Military History Journal Volume 14 no 2 December 2007: Durnford Long Belly and the farce at the pass:

An extract from that article reads: On 3 November 1873, a short, confused skirmish took place in the heart of the Drakensberg between Chief Langalibalele's amaHlubi warriors and a small Colonial column under Major Antony Durnford. From a military point of view, it was a trifling affair, but it was nevertheless to have far-reaching repercussions, both for the amaHlubi and for the young colony of Natal. This amaHlubi Colonial forces clash, which took place at Bushman's River Pass near Giant's Castle, is also of interest from the point of view of Durnford himself, given the important role he would play in the much more well-known black/white showdown at Isandlwana a few years later, in 1879.

The trouble with Chief Langalibalele of the amaHlubi, nicknamed 'Long Belly' by the British, began when the Resident Magistrate of Estcourt, J MacFarlane, ordered him to comply with the terms of the Gun Law by having all firearms in his people's possession sent in for registration. Langalibalele failed to comply, reluctant to press his subjects to surrender their hard-won weapons, even for a temporary period. Many believed that it was all a ploy to disarm them and, in practice, it indeed happened that guns brought in were retained indefinitely or rendered useless before return. Had the Natal authorities been less heavy-handed and the amaHlubi less panicky, the controversy need not have got out of hand. Instead, the initial incident led to a rapid deterioration of relations between the two, causing a chain reaction of accumulated misunderstandings that left each party convinced that the other was intent on war. http://samilitaryhistory.org/vol142ds.html