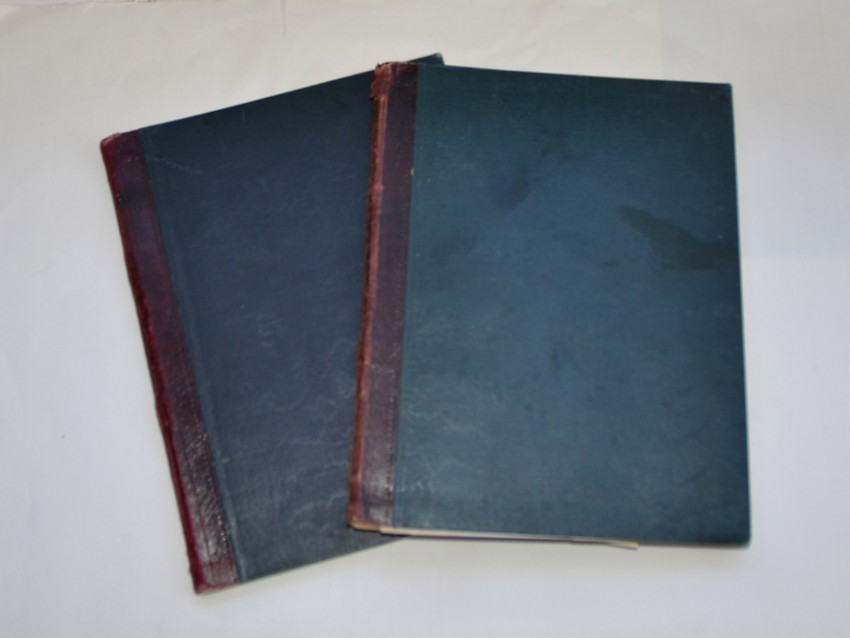 An extensive two volume handwritten (mainly in ink - some pages in pencil) personal diary of Charlotte Paulet reflecting her life in Mashonoland and Matabeleland from December 1893 until October 1895 and then after her return to London until March 1900. In two lined notebooks, circa 140 pages in each, measuring 22x17cms.  The first volume is inscribed by Paulet on the front free endpaper: "Mashonoland, South Africa.December 1893, Charlotte Paulet" and the second volume, similarly, "Bulawayo, Matabeleland. Sunday Sept. 1st. 1895. Charlotte Paulet". The diary is entered daily or every few days at first and then, after her return to England, much more erratically. The first volume and the first part of the second volume are entirely devoted to "Rhodesia". Both volumes are complete apart from a few blank pages at the end of volume two. They are tightly written in a neat easily readable script. They contain personal details as well as a wealth of material about life in "Rhodesia" and as the diarist and her husband were closely connected to all of the dramatis personae in the region at that time, they also contain huge amounts of information about the economic and political events of this formative time in the country. There are frequent and detailed accounts of meetings with and news of Cecil John Rhodes, Col. Frank Rhodes (his brother), Dr. Leander Starr Jameson (administrator), Dr. Hans Sauer, Andrew Duncan and many others, all important figures in the "making of Rhodesia". It is well nigh impossible to give an adequate description of the contents of this fascinating diary, but I will quote but a few brief extracts in an attempt to give the general flavour of the work:

- Sunday 17th. January 1894. The morning spent in a rush to get letters ready for the Homeward Mail and we had visitors - Dr Sauer and Mr. Hirsh came to say goodbye. We walked over later to the post office & saw the coach start for Victoria. A ramshackle red vehicle drawn by a fine span of mules who went off at a gallop.

- Friday 27th. January 1894. We are all feeling very anxious as to the news from Bulawayo & none having come in. Mr Duncan is apprehensive - he says we shall have trouble with the Native Question , a white man having been shot at Lo Magundi - the position is a critical one and difficult for him.

- April 6th. 1894. One feels more irritated against the iniquitous government of this country - a parcel of Jews and Rhodesite speculators are gambling at home over their stocks and shares, leaving the poor Country which is the victim of their gambling - undeveloped, uncivilized, uncared for, to starve. The people in this country have placed themselves under Mr Rhodes's heel and now they begin to feel it.

- 30th. (August 1894). A reef has been found between this and the hospital and causes some excitement - pegs are to be seen placed in all directions regardless of building enclosures etc. - so that if they were to prove good it would to all appearances proceed on its triumphal way thru all the Government buildings - this house included - but I think it is all a flash in the pan - and will soon pinch out.

- Sept.18th.(1894). Spent most of the day talking and in the Evening Dr. Sauer and Mr. Duncan dined. Had an interesting and amusing argument - on the subject of Government Autocratic versus Democratic. Mr. Duncan was decidedly "woolley" & didn't argue well.

- Tuesday 25th. (1894). Last night Mr. Rhodes and Dr. Jameson dined - and very interesting it was - having these two great men  together - Timmy and I sat and listened. Mr. Rhodes talked delightfully after dinner. Till 11.30.

- November 9th. (1894). On Sunday 4th. arrived Colonel Rhodes and dined here same night with Harry White - Careful as to not saying much about the coming boom - or rather perhaps a shade less sanguine than one had expected him to be - He left a faint impression of depression on my mind of cold water thrown over red hot hopes.

- December 7th. (1894). The tension as to the prospects of the Ayrshaw (?) was relieved on Tuesday when the results of the assay were made known - only however to Col Rhodes who particularly asked Dr Sauer not to cable the results to London until he and Harry White had profited by the information - such is the spirit of our acting Administrator. Strange things happen behind the scenes.

- Tuesday 1st. Oct.(1895). We had the first thunderstorm a very mild one. Mr Bryce came to say goodbye. Dr & Mrs Sauer also called - It is settled. I start tomorrow for Pietersburg in our own wagon. Timmy following by coach.

-  March 19th. 1900. ( from England - her first record in the diary since 7th. February 1899. Her husband had some time previously returned to Southern Africa.) Timmy wired to me that I was to sell the horses - dismiss the servants & come out to him in August but later he decided to come home and fetch me - and this was arranged for October - However, in Sept. on the 11th. - the Boer Republics declared war and the communications with Rhodesia cut off. Then came two months of constant anxiety for me.........

Henry William Montague Paulet, 16th Marquess of Winchester (30 October 1862 – 28 June 1962) was an English peer, landowner, soldier, sportsman, politician and business man. He was known as Lord Henry Paulet from 1887 until 1899.  In 1891 he went to South Africa, where he became a friend and hunting companion of Cecil Rhodes. In 1892 he married Charlotte Howard, a daughter of Colonel Howard of Ballina Park, County Wicklow, and the widow of Samuel Garnett of Arch Hall. Charlotte referred affectionately to her husband as "Timmy". Henry succeeded his brother (the 15th. Marquess of Winchester), who was killed at Magersfontein in the Boer War). The Paulets lived in Rhodesia between 1893 and 1895 - at first in Salisbury and later for a while in Bulawayo prior to their return to England. Paulet visited South Africa again in 1899 and later became Director of the British South Africa Company and President of the Victoria Falls Power Co.

Dr. Hans Sauer - Hans Sauer, whom Rhodes referred to as "the genial ruffian", became one of the principal characters in the scramble for the Rand's new-found riches, purchased claims for Rhodes's syndicate and, much later, in 1937, recorded his impressions of those exciting days in entertaining (and historically instructive) fashion in his well known book, Ex Africa. His South African ventures had left him a wealthy man, and he became wealthier still when he travelled to Matabeleland on the heels of the troopers who occupied Bulawayo, and invested shrewdly in land and mining. He is best remembered in Rhodesia as one of the three white men who accompanied Rhodes to the famous peace Indaba in the Matopo Hills during the Matabele Rebellion of 1895. He features frequently in this diary.

Dr. Leander Starr Jameson - 1st Baronet KCMG CB PC (9 February 1853 – 26 November 1917), was a British colonial politician who was best known for his involvement in the Jameson Raid.  In 1878 he went out to South Africa and settled down in practice at Kimberley. There he rapidly acquired a great reputation as a medical man, and, besides numbering President Kruger and the Matabele chief Lobengula among his patients, came much into contact with Cecil Rhodes. Jameson was for some time the inDuna of the Matabele king's favourite regiment, the Imbeza. Lobengula expressed his delight with Jameson's successful medical treatment of his gout by honouring him with the rare status of inDuna. Although Jameson was a white man, he underwent the initiation ceremonies linked with this honour. Jameson's status as an inDuna gave him advantages, and in 1888 he successfully exerted his influence with Lobengula to induce the chieftain to grant the concessions to the agents of Rhodes which led to the formation of the British South Africa Company; and when the company proceeded to open up Mashonaland, Jameson abandoned his medical practice and joined the pioneer expedition of 1890. From this time his fortunes were bound up with Rhodes' schemes in the north. In 1891 he succeeded Colquhoun as Administrator of Mashonaland. In 1893 he was a key figure in the First Matabele War and involved in incidents that led to the massacre of the Shangani Patrol. He also appears frequently in Charlotte's diary.

Col. Frank Rhodes - Colonel Francis William Rhodes, CB, DSO (9 April 1850 – 21 September 1905), better known as "Frank", is perhaps the best known member of the Rhodes family after his brother Cecil. Rhodes served for a brief period as Administrator of Mashonaland and as the appointed military member of the council of four in the government of Matabeleland under Leander Starr Jameson. The Jameson Raid was perhaps the most trying event in Rhodes's career. He was a leading member of the Reform Committee (Transvaal), in Johannesburg, attempting to liberalise the government of Transvaal Republic.

Andrew Duncan - Was appointed as the first surveyor-general of Rhodesia in September 1894, a post from which he resigned in July 1897 and in which he was succeeded by Joseph Millerd Orpen. He was on active service during the Matabele rebellion of 1896 and was awarded the Matabele War medal.When the Anglo-Boer War (1899-1902) broke out Duncan volunteered for service and served with the Royal Engineers and the Intelligence Department. Shortly after the British assumed control of the Orange Free State (now the Free State) during the Anglo-Boer War, Duncan supervised the compilation of the Orange River Colony Degree Sheet Series of maps, published in 1901.

Jacob's Raja of Sarawak + letter from the author