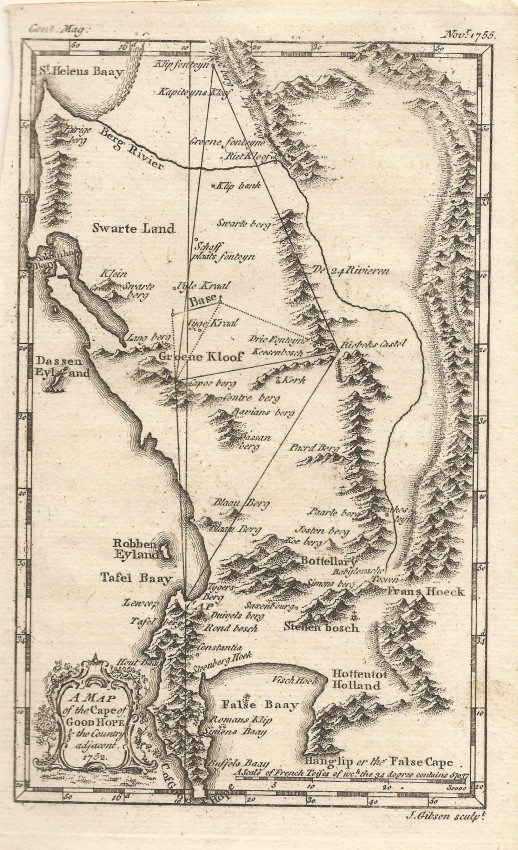 Map of the Cape of Good Hope and Environs

This small map is an important in the history of the surveying and mapping of the Cape of Good Hope. It is also the first generally available map from the first quantitative science experiment in southern Africa.

The map was published in 1755 in the Gentleman’s Magazine, the first publication to use ‘magazine’ in the context of a periodical publication. The map was engraved by John Gibson after the map published in the same year Memoires of the French Academy of Science.

The map illustrated an article on Nicolas-Louis de Lacaille's pioneering survey to determine the shape of earth at the Cape of Good Hope. He used a triangulation method (see the triangles on the map) in 1752 -3 to determine the length across one degree of latitude of the terrestrial meridian through his observatory in Strand Street, near its intersection with today's Adderley Street.

Despite precise measurements and faultless calculation, his result indicated that Earth was pear-shaped, an error caused by Lacaille’s failure to take into account the Newtonian gravitational effect of the Cape Mountains on the plumb bob on his instruments. Lacaille was surprised by the result, remeasured his baseline in the Swartland flats, near today's Darling, and checked his calculations.

This map depicts the triangles, with his base length measured on the flats of the Swartland, records the year of the survey and the respioneering work at the Cape of Good Hope. This was the first edition of Lacaille's map that was generally available to the public and it illustrates the dawn of quantitative science in South Africa.

The map is in very good condition, although, as is to be expected from a peiodical published more than two centuries ago, the paper is age toned.

Norwich map #220 (the version of the map that appeared in Lacaille’s Journal Historique, published in 1763)