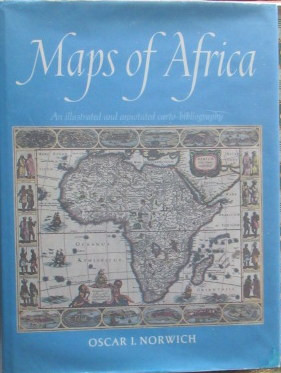 Large hardback with protected dustcover over original blue boards with maps to endpapers.

The exploration of the Dark Continent captured the European imagination for hundreds of years, and antique maps hold an almost irresistible fascination for eyeryone who has ever wondered at the feats of the early navigators and explorers. The maps in this book give one of the most complete records available of the discovery of Africa as well as an intriguing picture of how the inhabitants of Europe imagined her natives.

This book, the result of many years collecting and research, is designed to provide an illustrated guide to the maps of Africa for collectors as well as for those with a more general interest in the art. The maps are all individually illustrated, each with its own carto-bibliography. They have been subdivided into sections dealing with the Continent of Africa, Southern Africa, the Cape of Good Hope, Sea Charts, North, East and West Africa, and Islands, Town Plans and Ports.

The earliest map recorded is the incunabulum of Ptolemacus-Ulm (1486) and the latest is a surveyor's plan of Johannesburg in December 1886, only three months after its proclamation as the centre of the Witwatersrand gold fields. In the intervening pages are all the most renowned names of cartography, together with researched descriptions on points of especial interest. For the collector a special feature of the book will be its index, which provides, for the first time, a guide to the names of the engravers, publishers and cartographers appearing on the maps.