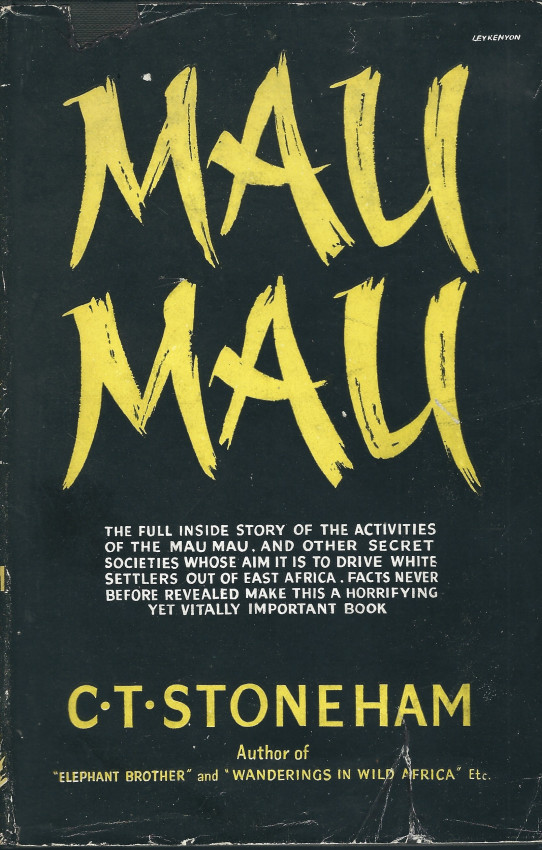 The Full Inside Story of the Activities of the Mau Mau.

The Mau Mau Uprising (1952–1960), also known as the Mau Mau Rebellion, the Kenya Emergency, and the Mau Mau Revolt, was a war in the British Kenya Colony (1920–1963) between the Kenya Land and Freedom Army (KLFA), also known as Mau Mau, and the British authorities Dominated by the Kikuyu people, Meru people and Embu people, the KLFA also comprised units of Kamba and Maasai peoples who fought against the white European colonist-settlers in Kenya, the British Army, and the local Kenya Regiment (British colonists, local auxiliary militia, and pro-British Kikuyu people). The capture of rebel leader Field Marshal Dedan Kimathi on 21 October 1956 signalled the defeat of the Mau Mau.

Author, naturalist and big-game hunter, Charles Thurley Stoneham was born in India in 1895 and attended Brighton College in England. After the death of his father he ran away from home at the age of 17 to seek adventure in Canada and the U.S. in the years prior to the Great War. While abroad he underwent great hardships and held a number of different jobs; at various times he was employed as a waiter, lumberjack, navvy, barber, door-to-door salesman and farmhand. Stoneham then returned to England and signed up for military service. Subsequent to a period stationed at home, he enlisted in 1915 with the 25th Regiment of the Royal Fusiliers and was shipped to British East Africa where he experienced fierce combat and forced marches. Although invalided out to recuperate in South Africa, he later rejoined the East African Campaign, meeting up with British Forces in Tanganyika. After the war, and a further period of convalescence in South Africa, Stoneham settled in British East Africa, where he undertook numerous hair-raising expeditions and safaris including several weeks climbing Mount Kenya. Having read avidly about the adventures of explorers and hunters of big game in Africa, Stoneham discovered for himself (and fell in love with) the wild animals and landscape of what was shortly to become Kenya.