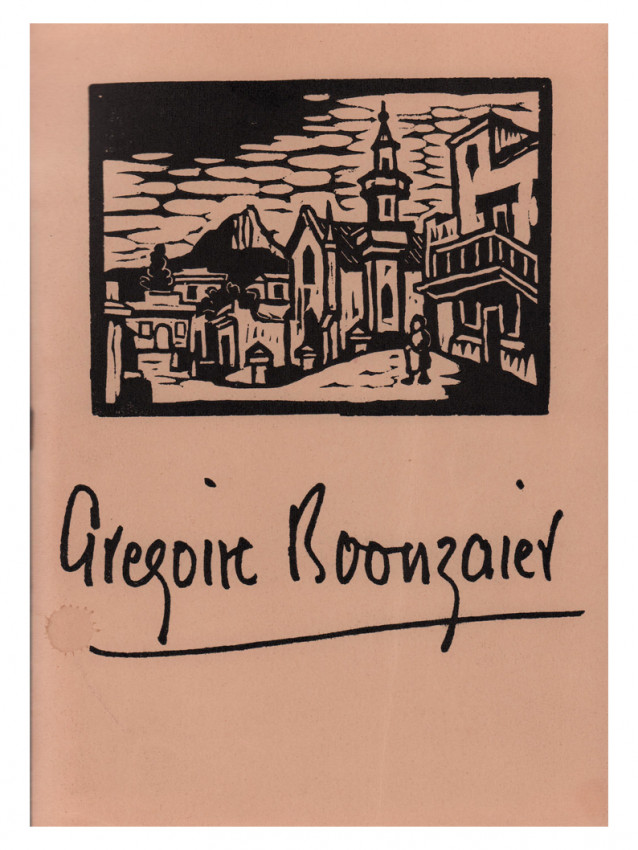 1 black file of 24 plastic leaves filled with items on both sides – one leaf has nothing in it.

These include the following:

A handwritten biographical sketch of D.C. Boonzaier (His father)
Catalogues of art exhibitions and invitations to openings of exhibitions, held by him, Peter Wenning and Alfred Krenz.
A series of Christmas cards with woodcuts signed by him in pencil under the illustrations with the date and signed by him inside dated from 1958 – 1973. There are 10 cards.
A letter by Walter Battiss to Bernard Lewis asking him if the Fine Art Society found his work suitable for the gallery, dated 4 May 1944.
A 5 page letter with the envelope addressed to D.C. Boonzaier with the postmark London May 30 1923. The letter is signed by J Percy Fitzpatrick and entitled A word for the reader.
A photograph of D.C. Boonzaier, Moses Kottler, Gregoire and A.A. Pienaar.
7 letters from Gregoire Boonzaier to Bernard Lewis housed in their original envelopes.
A telegram to Bernard Lewis from Boonzaier which states that the opening realized Four Hundred 4 leaves have material on Alfred Krenz

Gregoire Boonzaier was one of South Africa’s longest-lived and most popular artists, and embodied many apparent contradictions in his work. In 1991 Albert Werth noted that in Boonzaier ‘we see unified … the two poles of conservatism and … experimentation’. Gregoire became a powerful figure in the South African art world of the 1930s and 40s, first as Chairman of the New Group in 1938 and then as a founder member of the SA Association of Arts in 1944. Esmé Berman mentions Boonzaier as one of the principal exponents of ‘Cape Impressionism’. This was hardly something that he evolved personally, but rather owed to the precedent of Pieter Wenning (1873–1921). Nevertheless, it was a style that Gregoire made his own, gaining himself a popular following and also many imitators. It is perhaps in this light that his work can be more sympathetically considered, for despite critical observations on the limitations and formulaic aspects of his art, he became an admired success-story and role-model for many aspiring artists from underprivileged backgrounds.

Under apartheid, Gregoire’s reputation in these communities remained intact, possibly because it was known that he had joined the South African Communist Party in 1948. This has tended to elicit much sentimental and uncritical admiration of his reputation from the political left, which has largely remained impervious to the fact that his urban landscapes have romanticised and rendered as picturesque the poverty of areas such as District Six and other informal settlements. Almost simultaneously, such work also garnered much admiration from the conservative white Afrikaner nouveau riche during the apartheid era, commanding record prices. As early as 1946 the outspoken young art critic David Lewis had taken the view that Boonzaier was already ten years past his artistic prime and (that since 1936) he had ‘produced little that is of real and lasting merit … for years just the same old thing, time and time again, like a gramophone needle caught in the syncopation of an old dance record.’ Hayden Proud http://revisions.co.za/biographies/gregoire-boonzaier/#.XjqEg2gzYdU

D.C. Boonzaier (1865-1950) was a highly regarded South African political cartoonist, amateur theatre practitioner, critic and theatre diarist. Born Daniël Cornelis Boonzaaier at Patatsrivier in the Cape Province in 1865. He came to Cape Town in 1882 as a clerk in the Master’s Office, where he started drawing portraits from photographs of world celebrities. In 1903 he became the first cartoonist appointed to the permanent staff of the South African newspaper, South Africa News. At the inception of the Afrikaans newspaper, Die Burger, in 1915 he became its cartoonist until the 1940s, particularly famous for his caricatures and political cartoons.Boonzaaier died in Cape Town in 1950. In 1973, his work was included in the exhibition ‘South African Cartoonists and Comic Strip Artists’ at the Pretoria Art Museum. Boonzaier always had a keen interest in the arts, including theatre and theatre personalities, and corresponded regularly with artists and writers such as Leo Tolstoy, Sarah Bernhardt, George Bernard Shaw, Henry Irving, W.S. Gilbert and Arthur Sullivan. Jill Fletcher (1994) described Boonzaier as a "stage manager and capable actor among the gentlemen amateurs" and an "acute critic". A friend of many local theatre personalities, including Luscombe Searelle and particularly Stephen Black, he did numerous theatre-related cartoons and most significantly, kept an enormously useful journal of his avid theatre going. The latter material was first published as "My Playgoing Days" in SA Review, 9 March and 24 August 1923. These writings form the core of the second half of F.C.L. Bosman's second volume on theatre in South Africa (1980), dealing with the period between 1855 and 1912.His son, the famed painter Gregoire Boonzaier (1909-2005) also did some designs for theatre. https://esat.sun.ac.za/index.php/D.C._Boonzaier

Bernard Lewis (20 May 1870 – 5 February 1956) was a Jewish South African art critic, journalist, and author. He pursued his education at the University of Darmstadt and the South African College School. He cultivated lifelong friendships with the most prominent artists in Cape Town, foremost among whom was D. C. Boonzaier. The great South African artists Pieter Wenning, Moses Kottler, and Gregoire Boonzaier were in his close circle of friends.

He served as a trustee of the South African National Art Gallery and published many essays in the South African Nation, Die Huisgenoot, Die Burger, The Cape Argus and The Cape Times, He also was a translator, creating the first translation into English of a piece of Afrikaans literature:[dubious – discuss] Uit Oerwoud en Vlakte by "Sangiro" (Andries Albertus Pienaar) which he rendered as The Adventures of a Lion Family). He also wrote several children's books in Afrikaans under the pen name "Helen Blackmore".
https://en.wikipedia.org/wiki/Bernard_Lewis_(critic)

Alfred Krenz A particularly gifted youth, born in 1899 of a Viennese Jugendstil city architect and mother from a rural, land-owning family in Austrian Upper Silesia, Alfred attended the "Kunstgewerbeschule" in Vienna before being admitted, in 1918, into the famous Vienna Academy of Arts. In 1949 the family, grown then by five children, weary from their wartime experiences, left for South Africa. For Krenz, it was a new world, full of light and colour, which gave him fresh inspiration. In Cape Town he launched his own art school, which attracted not only young students, but also pupils from all walks of life. He held many one-man shows throughout the country, and participated in numerous group exhibitions. His landscapes and still lifes, but especially his masterly portraits, made a name for himself. Unfortunately, the estrangement from his wife, clashes with fellow artists and the local art establishment, and his own unbending nature overshadowed his later years. In October 1980 when on his way to a concert, he died of a heart attack, a disillusioned man.
http://www.decsey.com/ak/biblio.htm 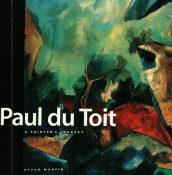 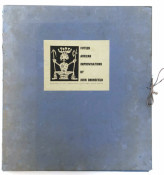