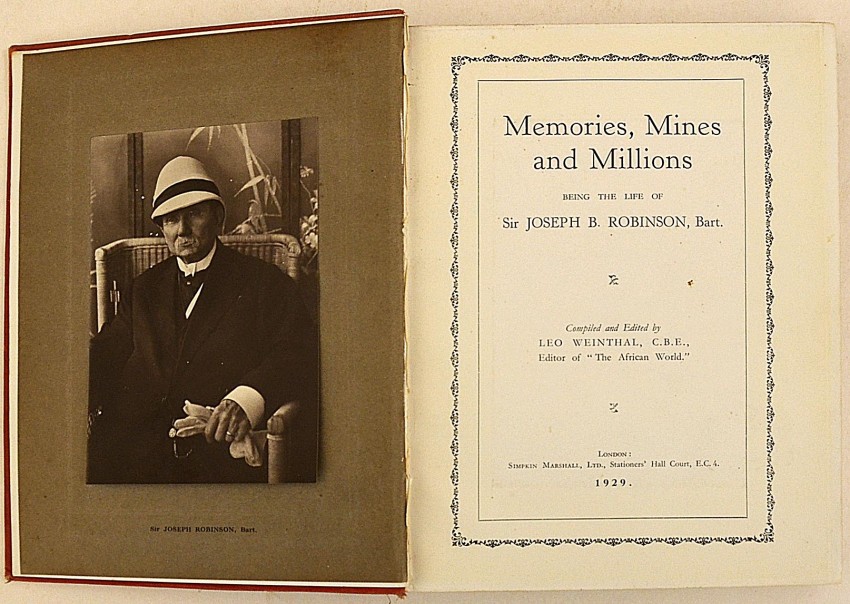 MEMORIES MINES AND MILLIONS - BEING THE LIFE OF SIR JOSEPH B. ROBINSON, Bart.

Sir Joseph Benjamin Robinson, 1st Baronet (3 August 1840 – 30 October 1929) was a South African mining magnate and Randlord. He was born in Cradock, Eastern Cape and died Wynberg, Cape Town.The son of an 1820 settler, he fought on the side of the Orange Free State in the Basuto War, and later became a general trader, wool-buyer and stock-breeder at Dordrecht. On the discovery of diamonds in South Africa in 1867 he hastened to the Vaal River district, where, by purchasing the stones from the natives and afterwards by buying diamond-bearing land, notably at Kimberley, he soon acquired a considerable fortune. His rather forceful business tactics came in for a lot of criticism, earning him the title of "Old Buccaneer", but even so he became a member of the Mining Board and later chairman. He was Mayor of Kimberley in 1880, and for four years was a representative of Griqualand West in the Cape parliament. On the discovery of gold in the Witwatersrand district in 1886, Alfred Beit financed a partnership with ₤25 000. Robinson purchased the Langlaagte and Randfontein estates, but Beit soon dissolved the partnership because of Robinson's temper and business methods. Robinson chose to keep the western portion of their former joint assets, while Beit took the eastern section. His views as to the westerly trend of the main gold-bearing reef were entirely contrary to the bulk of South African opinion at the time, but events proved him to be correct, and the enormous appreciation in value of his various properties made him one of the richest men in South Africa. He founded the Randfontein Estates Gold Mining Company in 1890, which was the largest individual undertaking on the Reef and one of the largest in the world.

This volume is a biography of Robinson and as such also recounts the story of early diamond and gold mining in Kimberley and Johannesburg. 248pp. with numerous photographs and illustrations and five original sepia photographs tipped on to heavier stock brown paper.

In the original red cloth binding with gilt lettering. The cloth is moderately worn with some fading of the spine and wear of the joints. Internally the volume is tight and clean with no foxing. 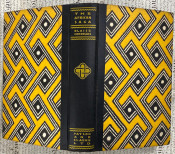 The African Saga. Translated from L’Anthologie Negre by Margery Bianco with an introduction by&hellip;

The romance of the Boer War: humours and chivalry of the campaign